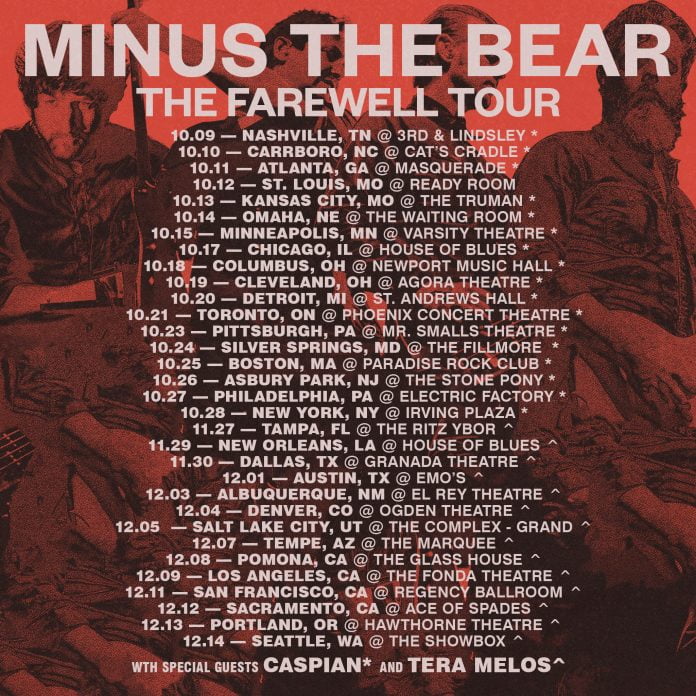 Minus the Bear went on a 10th anniversary tour for Planet of Ice, and now they’ve announced their farewell tour. Formed in Seattle, Washington, in 2001, and comprising current and former members of Botch, Kill Sadie and Sharks Keep Moving, this may be the last time you see Jake Snider, Dave Knudson, Cory Murchy, and Alex Rose, but their members will most certain continue in music. They also announced one last EP, Fair Enough, which comes out on October 9 via Suicide Squeeze and you can hear the first track below.

They also posted this note on their homepage:

After almost two decades of writing and touring the world together, we have decided to close this chapter of our lives as Minus the Bear.

What started as a silly inside joke inside the dingy confines of Seattle’s original Cha Cha Lounge back in 2001 quickly snowballed into years of adventures, creativity, and friendship. We could have never predicted the wild journey about to begin. We’ve accomplished so much over the past 17 years, and we are grateful for the experience.

Undoubtedly we owe all of these adventures to you, our fans. Without all of you, the memories of traveling the world, exploring different cultures, and witnessing the delight of your beautiful faces singing along wouldn’t have been possible. Your support weathered us through storms that easily could have scuttled the band. Throughout the years, it’s you who kept us going. We cannot thank you enough.

This Autumn we head out on our final tour in support of our upcoming 4-song EP “Fair Enough” courtesy of Suicide Squeeze Records.

These final shows are a celebration for the community of fans who gave us so much through years of dedication. We’ll be digging deep in the MTB catalogue and we are honored for the opportunity to play our hearts out for you one last time.