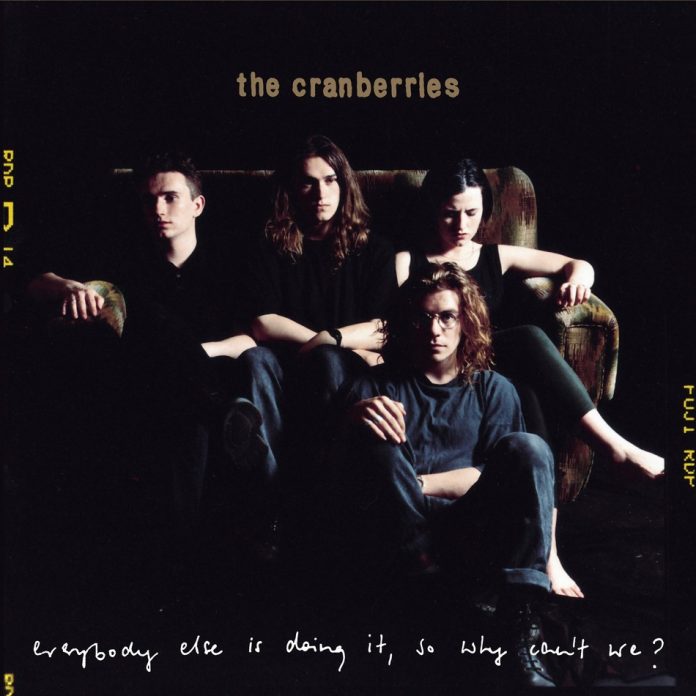 Last year, the four members of the Cranberries – Dolores O’Riordan, Noel Hogan, Mike Hogan, and Fergal Lawler – came together to plan a 25th Anniversary box set release for their debut album, Everybody Else Is Doing It, So Why Can’t We?, one of the definitive indie albums of all time. Following Dolores’ untimely death in January this year, the remaining band members have decided to go ahead with the album’s expanded 25th Anniversary Edition box set, which is set for global release on October 19 in 4CD and digital audio formats. On the same date, a 2CD Deluxe package pairing the remastered album with session outtakes, B-sides, the band’s debut EP, and early demos will be released, as well as digital and vinyl editions of the remastered album, including a 180-gram black LP and a limited edition color LP.

Originally released March 12, 1993, Everybody Else Is Doing It, So Why Can’t We? hit the No. 1 spot in both the UK and Ireland and has sold more than six million copies worldwide. At the time of the album’s release, Dolores remarked that the universal appeal of the Cranberries’ songs was based on “My own life and experiences as a human being, how human beings treat each other.”

In 2016, the Cranberries received a Broadcast Music, Inc. (BMI) Award for three million radio plays of their debut Island Records single, “Dreams.” Two 1991 demos for the song, taken from an original cassette, are included in the extras collected for the album’s 25th Anniversary Edition.

Rewind to the summer of 1985, when a lifelong friendship was blossoming between three boys – Fergal (14), Noel (13), and Noel’s younger brother Mike (12) – over a shared interest in breakdancing. Fergal would travel the short distance from Parteen, County Clare to Moyross, Limerick where Noel and Mike lived so they could practice their dance moves together. Their enthusiasm for the dance movement gradually faded, and after a while, they began to listen to mainstream artists like Nik Kershaw and Michael Jackson, and like many other teenagers before them, they began to pay more attention to what was being played on the radio.

Noel recalls that it was hearing the Cure’s Staring At The Sea singles compilation that changed everything in his musical world. He shared his newfound passion for the Cure with Mike and Fergal and this led them to discover other bands like Siouxsie and the Banshees, Echo and the Bunnymen, the Clash, New Order, and Joy Division. Looking back on this musical journey, Noel stresses that “All these roads led to the Smiths, who became very big in our lives later on.”

As well as becoming more conscious of the wider world of indie, Noel, Mike, and Fergal were also becoming more aware of a growing Irish and Limerick music scene. A friend of Fergal’s, a DJ on one of the city’s pirate radio stations, began to lend him recordings of Irish and local bands. Free from the rules and regulations of state-controlled broadcasting, pirate radio stations in 1980s Ireland allowed for never-heard-of indie bands to be played on-air. Aside from the global success of U2 and Sinead O’Connor, the group’s ears were also opened to the existence of local bands such as Private World, They Do It With Mirrors, Up The Downstairs, the Hitchers, and A Touch of Oliver. This presented the possibility of actually playing music in a band. In doing so, they would be following in the footsteps of many other hopeful would-be musicians in post-industrial cities such as Manchester, Liverpool, or Birmingham, where in a world of spiralling youth unemployment, playing music and being creative promised infinite possibilities.

In August 1989, the fledgling group met Niall Quinn, who became their singer. They called themselves The Cranberry Saw Us. By March 1990, Niall had decided to leave the band to focus on his other band, the Hitchers, and his parting was entirely amicable. He played a pivotal role in introducing Dolores to the band and arranging her audition, which took place in Xeric Studios, an old industrial space in the middle of Limerick. Noel, Mike, and Fergal were present with some of their friends when Dolores arrived. She carried a Casio keyboard under her arm, and, in stark contrast to the prevailing goth look (Doc Martens, black clothes, wild hair) which predominated in the small room, she wore a shiny pink tracksuit and had wet-look cropped hair. Dolores recalled their first meeting: “I went upstairs and there were about fourteen adolescent boys in the room. The hormones were just rampant in there, the tension was deadly. I said: ‘Before anything happens can anyone who is not in the band please leave the room’.” Noel describes Dolores as “being as quiet as a mouse” that evening. Mike remembers: “She was introverted back then . . . but she still got up and had the guts to do it.” Everyone in the room was taken by her voice: “We were immediately blown away,” said Mike. “Her voice was something special.” Dolores recalled: “I really liked what I heard: I thought they were nice and tight. It was a lovely potential band, but they needed a singer – and direction.” One of the instrumentals played that evening by The Cranberry Saw Us would soon become “Linger,” a relatively simple song that within two years would catapult the band to global stardom.

1991 was a crucial year for the Cranberries. On April 18th, the band played a hometown gig as part of the University of Limerick’s Rag Week to 1,400 students – and 32 A&R men, most of whom had flown in from London. In attendance was legendary record producer, the late Denny Cordell (1943-1995), who was then A&R for Island Records. Cordell didn’t offer the band the largest amount of money, but instead promised to look after them and to allow them the space to develop at their own pace. He clearly had a strong belief in their potential to succeed. Around this time, the band shortened their name to the Cranberries.

In 1992, the Cranberries took on a new manager in the form of the iconic Geoff Travis of Rough Trade and they began recording their debut album with producer Stephen Street. Street brought with him a vast production resume as both engineer and producer (the Smiths, Morrissey, Blur), as well as expertise as a songwriter, having co-written Morrissey’s first solo album, Viva Hate (1988). For the Cranberries, to be working with the producer of the Smiths’ Strangeways, Here We Come was a dream come true.

As the band’s wordsmith, Dolores was the source of all the band’s album titles. Everybody Else Is Doing It, So Why Can’t We? stemmed from her dogged determination to succeed. “Elvis wasn’t always Elvis,” she said. “He wasn’t born Elvis Presley, he was a person who was born in a random place, he didn’t particularly have a lot, but he became Elvis. And Michael Jackson was born somewhere, and he became Michael Jackson and so on and so forth. And I thought we were just born in a random place so why can’t we be that successful, as well? And I believed we could, but the majority of people were saying, ‘You’re absolutely nuts, you’re not going to make it, you can’t make any money out of it, you should do cover versions!’.” A simple but clever title, it answers its own question by implying why not? Why shouldn’t a band from a small city in the southwest of Ireland get signed, make a great record, and conquer the world?

Indeed. By Christmas 1993, the band had toured extensively throughout Europe and the U.S. and their return to Ireland was a triumphant affair. Their debut album had now clocked sales of more than 800,000 copies in the United States and “Linger” had reached No. 8 on the Billboard charts. The album achieved platinum sales status in the United States, Australia, New Zealand, and the UK. It became a No. 1 album in Ireland and the UK; in the U.S., it peaked at eighteen on the Billboard 200 albums chart.

The phenomenal success and continued popularity of ‘Everybody Else…’ should not only be judged by its total sales – six million copies sold worldwide to date, including five million in the U.S. alone – but also by the quality of the repertoire. Although influenced by indie bands such as the Smiths, the Cure, and New Order, the distinctive sound of the Cranberries’ first album is an example of how the best popular music often comes from cross-pollination and hybridization. Just as a young Johnny Marr was influenced by the music of Rory Gallagher and Thin Lizzy, the Cranberries were, in turn, influenced by the sound of the Smiths and made their own from what they heard.

The alchemy of Noel and Dolores as co-songwriters, combined with Noel’s shimmering guitar playing, rock-solid backing from Mike and Fergal, and Stephen Street’s aptitude for space all contributed to the album’s distinct sound. Dolores’ unique mix of Gaelic, Catholic, and indie vocal influences, joined with her ability to write lyrics perfectly capturing the frustrations of late adolescence, gave these songs universal appeal. In the 25 years since its release, this carefully crafted debut has stood the test of time as a landmark album.