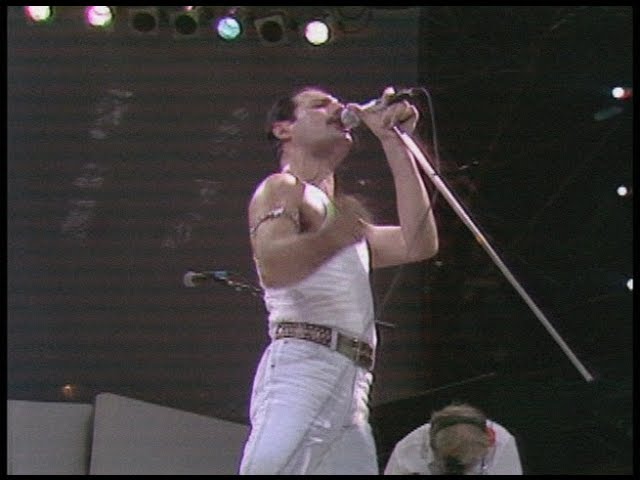 “…No we’re not all wonderfully well behaved kids, are we? I guess but that’s that’s going to sort of actually be the nice part of it actually there’d be lots of friction and we’re all gonna try and outdo each other. We’ll just go out and play.”

And play they did.

Queen’s twenty-one minute performance at Live Aid on July 13, 1985, which began at 6:41 pm, was voted the greatest live performance in the history of rock, in a 2005 industry poll of more than 60 artists, journalists and music industry executives. Queen’s lead singer Freddie Mercury at times led the crowd in unison refrains, and his sustained note during the a cappella section came to be known as “The Note Heard Round the World”. The band’s six song set opened with a shortened version of “Bohemian Rhapsody” and closed with “We Are the Champions”.

But before all of this, they talked about what they want to accomplish, before doing a stage rehearsal.

…and here’s footage of their rehearsal…

…and finally, one hell of a set.