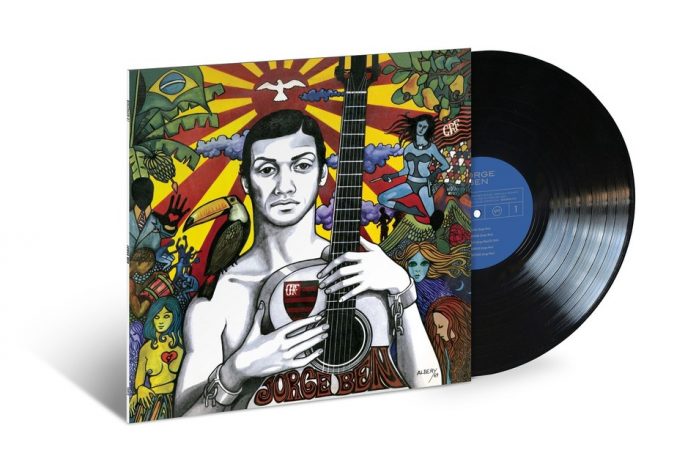 In advance of its 50th anniversary next year, Verve/UMe has released Brazilian music innovator Jorge Ben’s massively influential self-titled 1969 debut LP on vinyl for the first time in the United States. Mastered from the original analog master, this elusive classic is now available on 150-gram black vinyl with a tip-on jacket and features the original Portuguese liner notes.

The beloved Brazilian singer-guitarist-composer’s unique samba-soul fusion has helped to establish the artist as a key figure in such musical movements as bossa nova, Tropicália and Jovem Guarda, and to establish Ben as one of Brazil’s most important composers and performers. His distinctive performing style and adventurous rhythmic approach has been emulated by countless Brazilian artists, and his compositions have been recorded by acts as diverse as Herb Alpert and the Tijuana Brass, Gal Costa, José Feliciano, Ella Fitzgerald, Dizzy Gillespie, Júlio Iglesias, Al Jarreau, Miriam Makeba, Caetano Veloso and Sérgio Mendes who had a huge hit with the ubiquitous “Mas Que Nada.”

Although it did not receive a U.S. release when it was originally issued in 1969, Jorge Ben has been acknowledged as a seminal work, with such songs as “Que Pena” and “País Tropical” standing amongst the artist’s most popular and enduring material. Jorge Ben is a landmark album in other respects, introducing many of the elements of Ben’s unique fusion of samba, funk, rock and bossa nova, along with humorous lyrics that explore edgy and unpredictable subject matter.

Jorge Ben was born Jorge Duilio Lima Menezes in Rio de Janeiro on March 22, 1942. The son of a local musician, he grew up in poverty in the Favela da Rua do Bispo, but played music through his youth and became a professional while still in his teens, performing in a variety of styles. In 1965, he toured the U.S. for the first time, and was featured in his first TV series in Brazil. Ben’s penchant for unconventional hybrid rhythms made him a controversial figure in Brazil, leading to multiple bans from television. But successful American covers of his songs by Herb Alpert, José Feliciano and Sergio Mendes helped to set the stage for a series of Brazilian successes, and Ben was in demand on his home turf by the time Jorge Ben was released.

Now, American listeners can experience this visionary classic the way it was meant to be heard.