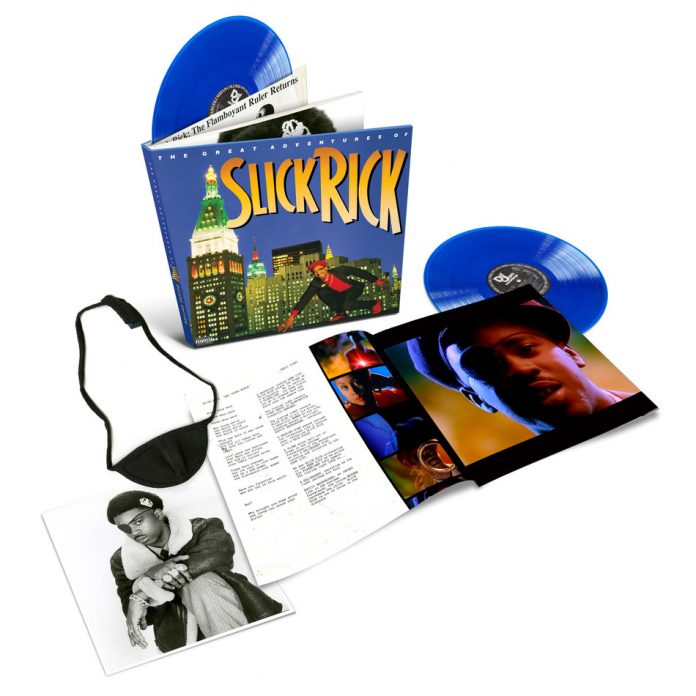 To celebrate the vital album’s milestone, Def Jam/Urban Legends/UMe will release a newly remastered and expanded 30th Anniversary Edition in a suite of digital and physical formats, including Deluxe digital and CD packages on February 22, 2019, and Deluxe and Standard vinyl LP editions on March 15, 2019. The package includes Rick’s first new original song since 1999, “Can’t Dance To A Track That Ain’t Got No Soul.” A previously unreleased track, “Snakes of the World Today,” written, recorded and produced by Slick Rick during sessions for the album, is available now for streaming and download purchase. Slick Rick also debuts two limited-edition ‘Great Adventures‘ t-shirts, available exclusively from Bravado.com and Rick’s own online store: slickrickisart.com.

THE GREAT ADVENTURES OF SLICK RICK (30th Anniversary Deluxe Edition) adds six previously unreleased tracks, including a brand-new song, demos, and the shelved session recording, plus memorabilia and paraphernalia, and more. The album’s 12 songs, including the classics “Teenage Love,” “Children’s Story,” “The Ruler’s Back,” “Lick the Balls,” and “Treat Her Like a Prostitute,” are joined by:

Driven by the back-to-back chart successes of “Teenage Love” (Top 20 R&B, Top 10 Rap), and “Children’s Story” (Top 5 R&B and Rap, and consistently cited as one of the Top 50 Rap hits of all time), THE GREAT ADVENTURES OF SLICK RICKsoared to No. 1 on Billboard‘s R&B Albums chart for five weeks. The album was one of the first hip-hop LPs to be certified platinum by the RIAA and it provided a solid foundation for Slick Rick, who went on to release three successful follow-up albums on Def Jam: The Ruler’s Back (1991), Behind Bars (1994), and The Art of Storytelling (1999).

Recently, Slick Rick’s omnipresent influence within fashion and lifestyle culture landed him as the face of a new collaborative campaign between fashion retailer Nordstrom and luxury travel goods and accessories brand, MCM. The retro collection includes over 100 exclusive items for men and women, inspired by the brand’s most coveted and iconic styles. Veteran hip-hop photographer Sue Kwon shot the campaign highlighting the collaboration. She returned to the streets of New York to shoot Slick Rick, who merges his personal style with pieces from the collection.

Grammy-nominated Slick Rick’s impact on Rap and rock over the last three decades is attested to by the volume of artists who have sampled his work, starting with his first double-sided hit single with Doug E. Fresh’s Get Fresh Crew in 1985 (prior to arriving at Def Jam), “The Show”/”La Di Da Di.”  According to whosampled.com, “The Show” has been sampled more than 144 times, by Eminem, Jay Z, Missy Elliott, Lauryn Hill, LL Cool J, Redman, and others.  “La Di Da Di” has been sampled some 940 times, by the likes of Eminem, Jay-Z, Ludacris, Big Daddy Kane, Ini Kimoze, Mary J. Blige, Mariah Carey, Beyoncé, E-40, the Beastie Boys, and more. It is one of a handful of the most sampled rap songs in the history of all genres of music.

Rick’s Def Jam output added countless hundreds more samples to the tally.  In fact, he would go on to become the most sampled British-American artist in hip-hop history. Ever influential, he has been referenced in over 100 songs from the early 1990s to present day, by artists ranging from Nicki Minaj, J Cole, Pitbull, and will.i.am., to Amy Winehouse, Big Sean and Future. Slick Rick has acted and cameoed in more than 10 movies and videos. He has collabo­rated with musical icons from Jay-Z and Missy Elliot to OutKast, Jermaine Dupri, Mos Def, Common, R. Kelly and Aaliyah.

Born to Jamaican parents in South Wimbledon, London, 1965, Ricky Martin Lloyd Walters was raised in England for most of his first 10 years.  It was there he was blinded in his right eye as an infant, which would result in his signature eyepatch. His family emigrated to the Bronx when Rick was 11, and he later attended LaGuardia High School of Music & The Arts.  There he formed the Kangol Crew, a 7-member posse (including two co-eds) with future rap star Dana Dane.  Rick graduated in ’83 and hooked up with Doug E. Fresh a year or so later, after defeating the legendary Cold Crush Brothers at a rap contest in the Bronx.  One of the most audacious debuts in the history of rap was made in the summer of 1985 by a young man billed as MC Ricky D and dubbed Slick Rick by his partner, Doug E. Fresh.  The two were teamed up on the 12-inch single, “The Show” b/w “La-Di-Da-Di” (Reality Records). The record was everywhere that year, and ultimately led to Rick’s contract with Def Jam.

As a philanthropist and longtime Bronx supporter, Rick has given of himself to his community and culture for more than three decades.  In turn, January 9th was declared Slick Rick Day three years ago by Bronx Borough President Ruben Diaz. Rick and his wife Mandy have spent Christmas Eve with inmates at New York’s Riker’s Island prison (where he himself had once been housed).  He has worked with the Bronx Youth Empowerment Program (BYEP); done seminars in Florida on immigration reform and bettering the community; participated in will.i.am’s “Trans4M” concert, which raised more than $2.4 million for the music producer’s i.am.angel Foundation; and donated items from his iconic wardrobe collection to the Smithsonian Foundation’s National Museum of African-American History. His efforts have earned Rick accolades from Miami Dade College, the Florida House of Representative, the State of Arkansas, Keys to the City of Houston, New York City Council, and Music Saves Lives, and the Mixx Cares Humanitarian Award from the Latin Mixx Awards Committee.

In addition to owning real estate in the Bronx, Rick’s business interests include partnering with will.i.am to create a limited edition ill.i Optics capsule collection of sunglasses in 2015. That same year, Rick joined forces with custom-apparel platform Teespring to produce a limited edition white tee featuring representations of his best-known gold and diamond chains. 2018 found Rick connecting with Odd Sox to release two customized socks from the company’s music collection, featuring iconic images of the artist from hip-hop’s golden era. He also teamed up with Lyric Culture for a limited-release women’s tank top sporting the lyrics to “La Di Da Di,” sold exclusively at Forever 21. A new collaborative campaign between fashion retailer Nordstrom and luxury travel goods and accessories brand MCM features the face and flair of Slick Rick. Pop-In@Nordstrom, the rotating concept shop at Nordstrom, features a special capsule collection celebrating the heritage, history and future of MCM. The collection includes over 100 exclusive items for men and women, inspired by the brand’s most coveted and iconic styles. Pop-In@Nordstrom MCM is available now through November 11th at 10 Nordstrom locations and online at Nordstrom.com/pop.

In other roles, Rick has read the audio book version of How To Get A Record Deal: The Knowledge To Succeed written by music-industry veteran Wendy Day.  Rick’s next moves are in voice animated content and fashion, and the design of a custom sneaker/shoe line.

Despite all his considerable accolades and accomplishments, “Hip-Hop’s Greatest Storyteller” was unable to travel or perform outside of the United States for most of his iconic career. A turbulent, two-decade-plus immigration battle ended in April 2016, when he became a naturalized U.S. Citizen. Maintaining dual citizenship with Great Britain, he celebrated the milestone in November 2016, performing sold-out shows in Manchester, Bristol, London, Birmingham, and Brighton in the United Kingdom. The “Coming Home” tour also hit nearby Dublin, Ireland and Paris, France. Live Nation UK streamed the London show worldwide.

With more than three decades in the world of music, this legacy artist is still striving, still working, still giving back to his community and still ruling.