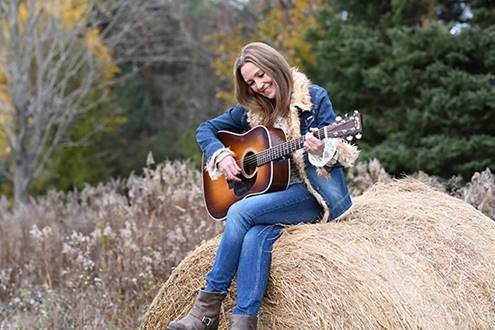 The Toronto-based singer/songwriter shares a personal connection to the cause; eight years ago, her eldest son tripped and fell down a spiral staircase, lapsing into a coma. Now, she continues her advocacy work, spreading awareness to others afflicted.

“It was a bomb,” Jarvie recalls. “I couldn’t breathe. My mind, which was always so busy, was finally quiet.

“The doctors said he wouldn’t survive, but he did.”

More than 1.5 million Canadians currently live with the effects of an acquired brain injury, and that number increases daily.

The miracle of her son’s recovery changed Jarvie’s life.

One afternoon while he was still at the hospital, she heard a melody in her head. She picked up her guitar and started writing. “Over the next few months, many songs came out. Some fast and fully formed, it was powerful and strange.”

As one listens to the unique beauty of Jarvie’s sound and sensibility — both on her new record In The Clear and her debut, produced by Hugh Christopher Brown, Spiral Road — it’s hard to imagine that it was only in 2014 this Ontario wife, mother of four and lawyer, found the courage to tap into her songwriting powers and record an album.

Until then, Jarvie had never written any real music before, except for a few throwaway songs. Spiral Road garnered rave reviews from the US, Canada, and Europe, comparisons to Emmy Lou Harris and Lucinda Williams, and a 2015 nomination from the Independent Music Awards for “Best Concept Album”. No Depression described Jarvie’s voice as “seraphim-pure, reaching out and lifting your spirit often without permission.”

Jarvie’s sophomore record In the Clear, releasing in North America on January 22, 2019, and Europe on February 8, 2019, picks up where Spiral Road left off – delving again into the aftermath of her son’s brain injury – but going well beyond it.  The tunes tunnel into feelings and impressions that are the essence of Suzanne’s artistry, luminous rabbit holes merging mystical lyrics with reflections on life’s big challenges that fans of Joni Mitchell, Bob Dylan or Lucinda Williams would appreciate. Producer Hugh Christopher Brown keeps the music steeped in mostly acoustic sound, and the mix of dobro, mandolin, guitar, violin and bass, welcomes Jarvie’s clear and haunting voice as she sings:

Somewhere far away from here, long before the sun appears
You will feel, every single fear, you will feel it, feel it,
‘Till you’re back in back in
In the clear, In the clear

The songs also touch on addiction, forgiveness and the legacy of trauma on the entire family. The opening track, “Headless Rider” reflects the unexpressed feelings of her daughter, Sara, who is the twin sister of Jarvie’s eldest son, while the fierce and bluesy “Point Blank” is Jarvie’s response to her son’s wild mood swings:

Blow in like a hurricane, move out in a slow rain
Mind bent up and insane, killing me like a freight train
Don’t you get to feel strange, like Shane on the old grange
35 mm frame, it’s a movie size blame game
Point blank range, get down on your knees,
You’re gonna say thank you, you’re gonna say please

In the Clear and Spiral Road are poetic and imaginative journeys that anyone who has dealt with a family tragedy can relate to. Jarvie said: “The album is another reverie – where the songs reflect on motherhood, death, freedom and longing for peace. For me, the title track has a melancholy irony; In The Clear is where I want to be, always. Instead, it is this ephemeral state that never lasts. So, you learn to really enjoy the peaceful moments, knowing more challenges are on the horizon.”

Some of Jarvie’s songs are inspired by science fiction literature, which is a “lifelong escape hatch for me,” she says. “I’m a pretty eccentric person in some ways. I find the weird visionary parables to be so cool and idiosyncratic. They give artistic permission for highly individualized, obscure trance-like imaginings. ‘Carpenter Bay’ was written during an odd period when I was reading a lot about psychiatry and medication….it’s about a journey through neurons, psychopharmacology drawings, and the world’s most famous woodworker. But it’s also just about waiting for that miracle that never happens, and learning to say out loud and accept that what you want the most is gone. On ‘One It Finds’, my friend Jeff Morrison kept asking, ‘what’s going on with the probe?’ “It’s a secret. I know the lyrics are a bit inscrutable, but they mean something real. I don’t think you have to understand everything. It could just be that a melodic line or poetic phrase resonates and moves someone and that’s all you need. The ideas aren’t very concrete, and sometimes I have to rush and grab them before they decay. But anyhow, it’s why I thank John Wyndham, Tolkien and Rodenberry, etc. in my liner notes. Gotta keep weird alive man!”