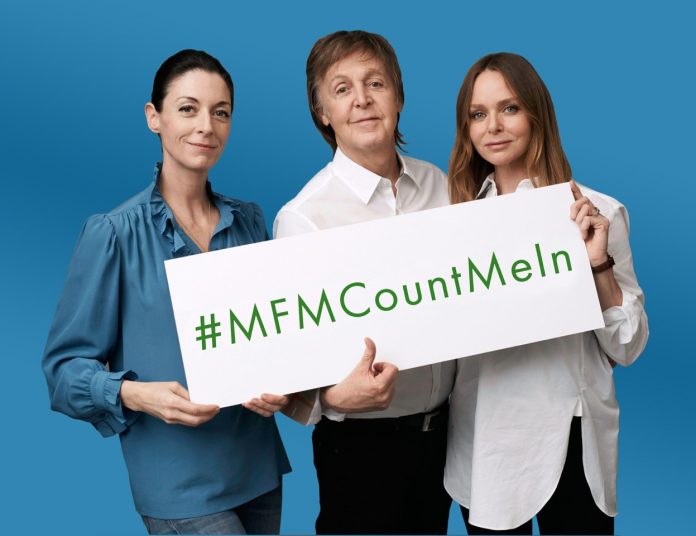 As the Meat Free Monday campaign celebrates its 10th year, the campaign, headed by Paul, Mary and Stella McCartney, is launching #MFMCountMeIn – a ‘loud and proud’ way to be part of a growing global movement.

Meat Free Monday has come a long way since its launch in 2009, working with hundreds of schools, universities, restaurants and businesses, making an appeal at the EU Parliament, publishing The Meat Free Monday Cookbook, producing a documentary short, ‘One Day a Week’, etc. But these are critical times and there is still a long way to go.

The link between diet and climate change is now widely known and the science is clear: In 2018, the UN Intergovernmental Panel on Climate Change warned that we have just 12 years to stave off a huge climate crisis, with the food system identified as a major problem. Just last month, a stark report by the UN’s Intergovernmental Science-Policy Platform on Biodiversity and Ecosystem Services highlighted how one million animal and plant species are now threatened with extinction as a result of human activity including animal agriculture and industrial fishing. Young people across the world have been reacting to the lack of political action on climate by staging ‘climate strikes’, international group Extinction Rebellion has called on governments to take action and the UK Parliament has called a climate emergency.

Shopping habits have changed dramatically in the last ten years, with consumer demand leading to many new plant-based products now being available in shops and restaurants. According to research company Kantar Worldpanel, 150 million more meat free dinners were sold in January 2019 compared with the same month the previous year. And 21% of UK households have cut down on their meat intake, a shift due in part to campaigns like Meat Free Monday.

The meat free movement is gaining huge strides outside of the UK too with successful campaigns running in over 40 countries. Sid Lerner, Founder and Chairman of the ‘Meatless Monday’ campaign in the USA said: “Congratulations to Meat Free Monday on your 10th Anniversary! We at Meatless Monday are thrilled to work with a great global partner in our mission to help reduce meat consumption around the world. With our combined strength, we can effectively raise awareness that cutting meat one day week can benefit personal health and the health of the planet. We look forward to the next decade of partnership and growth with Meat Free Monday.”

Mônica Buava, manager of the Brazilian ‘Segunda Sem Carne’ campaign, which is also celebrating its 10th anniversary this year, said: “Brazil is one of biggest meat producers in the world but also has a very strong Meat Free Monday movement. In 2018 alone, 67 million vegan meals were served as a result of our partnership with the government of São Paulo.”

Norio Kojo, a Japanese Cabinet Official and campaigner from ‘Meat Free Monday All Japan’ highlighted how growing tourism, as well as the Olympics and Paralympics being held in Tokyo next year, has led to a growing number of restaurants and hotels offering meat and fish free options in Japan, and the Japanese Government itself is also involved. He said: “The Cabinet Office staff canteen offers a vegan lunch every Monday and Friday, and the Tokyo Metropolitan Government staff canteen offers it every Monday. It can be said that such active attitudes of the central and local governments are accelerating private sector movements.”

David Yeung, Founder of ‘Green Monday’, based in Hong Kong, said: “On behalf of the Green Monday organisation, we would like to extend our heartfelt congratulations to the 10th anniversary of Meat Free Monday. Thanks to the vision and leadership of the McCartney family, this movement has grown globally and is generating enormous impact. We are honoured to be partner of MFM on this global mission, and we sincerely look forward to further collaboration in catalysing more change especially here in Asia.”

Meat Free Monday has a new logo, with a personal touch from Paul McCartney, and hopes its fresh and fun anniversary campaign will inspire people to become part of the movement, or, if already supporting, reduce their meat and dairy consumption even further. Please join in online using the hashtag #MFMCountMeIn.