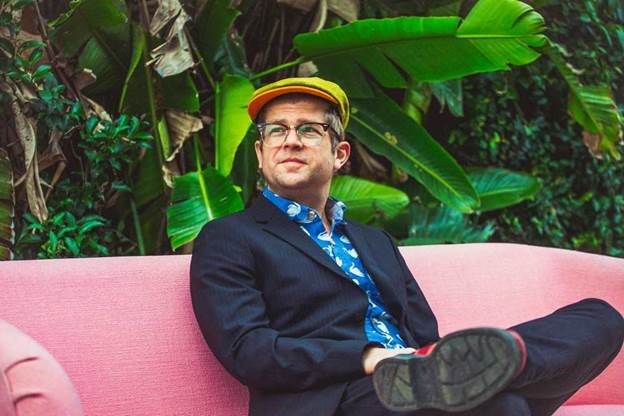 Last week, Old Man Luedecke released his latest LP, Easy Money on True North Records. Today, the acclaimed songwriter is announcing a run of fall tour dates supporting the record and for the first time ever, will have a full band to support him on stage.

“This will be the first tour I’ve ever done with a full band,” says Luedecke. “Mostly made up of the album band from working at Montreal’s Hotel2Tango with Mike O’Brien (Vic Chestnutt, Sin and Swoon) and Jamie Thompson (Socalled, Islands), and rounded out with Brian Kobayakawa on bass (Serena Ryder, Creaking Tree). I thought it’d be really nice to recreate the calypso vibes of the new record. We performed the record in Montreal to great success this past Sunday at the Festival Folk Sur Le Canal and it felt so good to be on the festival main stage with a fuller sound for the afternoon easing in to the evening. It’s pretty exciting to put old and new songs into the band context and bring the sound not just of this record but all of my records on to the road this fall. It just seems like time for this new fun.”

Easy Money picks up where Old Man Luedecke’s award winning, and most successful release to date, Domestic Eccentric (2015), leaves off; four years farther down the road, dreaming about his ship coming in, still a parent but now grappling with the newness of middle age, dad jokes, love for an abiding partner, the death of a parent, along with some calypso-feeling local Nova Scotia history thrown in for good measure.

Composition and recording were both begun at the Banff Centre’s songwriter-in-residence program. It was there that Luedecke met the album’s producer Howard Bilerman of Montreal’s famed Hotel2Tango studio where the album was eventually recorded. The ten new original compositions and two covers run a modern storytelling line from the fifties folk and calypso boom into the everyday of tangible middle life. Guest appearances by long-time collaborator and Grammy award-winning Tim O’Brien, Afie Jurvanen of Bahamas, and Fats Kaplin (Jack White, John Prine) add piquant accents to the impeccable playing of Luedecke and a crack Montreal studio band of Mike O’Brien, Joshua Toal, and Jamie Thompson.

Easy Money begins with three upbeat incantations of what is surely the beginnings of a mid-life crisis (“Dad Jokes”? “Wakeup Call”, come on!) then moves to 2 songs musing about death; both inspired in part and in different ways, by the passing of Luedecke’s father, the passing of Leonard Cohen, and current politics and the death of truth. There are two island-themed numbers that imagine a laid-back life in the local un-tropical paradise of the Canadian Maritimes. Then comes a country song with killer fiddling and harmony singing by Tim O’Brien, a dance number of frightful worry, and then a cover of Nana Mouskouri’s French language cover of Bob Dylan’s topical apocalyptic plaint, “Hard Rain’s Gonna Fall”. This is followed by a traditional sea shanty about a mermaid and a shipwreck. The album closer, “‘I Skipped a Stone”, is the most beautiful song about hoping your wife will pick up the phone. The song is made all the sweeter by the special appearance of Bahamas’ playing and singing, to close out Luedecke’s sixth full length studio album.

Old Man Luedecke is the recording and performing name of Christopher Luedecke, 2 time JUNO and multi East Coast Music award-winner, and Polaris Music Prize nominee from Chester, Nova Scotia. Since 2004 he has travelled the world playing festivals, theatres and clubs. He delights his audiences with his heart-felt command of the stage. Plus, his inspired banjo playing and wry storytelling cut to the heart of normal/extraordinary experience itself.

Born and raised in Toronto, Luedecke followed Thoreauvian and romantic notions to Canada’s Yukon where he fell in love and started composing folk songs with a banjo. Since 2005, he has lived rurally on the south shore of Nova Scotia in Canada’s music-rich Maritime provinces. He has had major appearances at Canadian, Australian and UK festivals and has performed with the likes of Feist, Bahamas, Tim O’Brien, and Rose Cousins. He has built a name and a following that has been uncompromisingly unique and is now firmly established in the top echelon of Canadian folk artists. As the Vancouver Folk Festival says, “He is a musical singularity to be savoured and shared.”