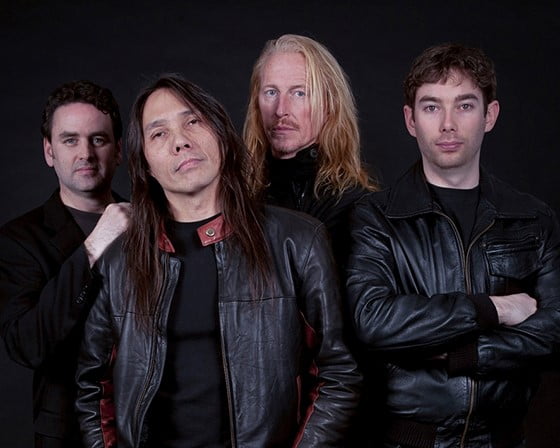 Canadian melodic hard rockers Iron Age Mystics say “Save It For The Revolution” in their newest single off this year’s politically stirring album, Pride Before The Fall — available now!

The Toronto-based rockers continue to hit creative pay dirt with not one, two or three rad reactions for their debut release, but four.

The first? The record hit such a nerve inspiring the definitive political cartoonist and renowned illustrator Mr. Fish (LA Times, Truthdig, The Village Voice, Vanity Fair) that he provided their exclusive cover art of the ‘evil bunny-man’ as his personal interpretation of the release.

“Another one of the crazier twists during the making of the album happened with the voice track of Bernie Sanders that appears on “Big, Bad Motherfucker,’” lead singer/songwriter Kevin Connelly continues. “The song is a tongue-in-cheek shot at corporate greed, and probably the closest this record gets to being humorous.

“We realized, though, we probably needed to ask permission to use Mr. Sanders’ comments. We contacted his office, thinking we’d likely never hear anything and have to cut the clip, but instead the office sent back an official endorsement.

And the fourth? That’s the album itself — a debut masterpiece of fitting larger-than-life rock-out proportions.

Designed to inform, awaken, and inspire, Pride Before The Fall is the result of nearly ten years in the making. A jam band with a few lineup changes, as one does, Iron Age Mystic and their resulting release were a ‘happy accident’, says Connelly.

“It morphed into a rather serious venture into socio-political music. The music is melodic hard rock with a lot of dissonant chording and a few pretty crazy twists and turns in thee arrangements. We’ve combined the raw energy of hard song with lyrics that beckon to the human conscience — that deep desire for personal and social change — while still, for the most part, remaining hopeful.

“The ‘Iron Age’ part of our name is meant to imply that we live at a very low point in our culture,” he continues. “The ‘Mystics’ is to imply we are people who see through it.”

“If tuning out is your routine, this album might not be for you,” Connelly suggests, both literally and figuratively regarding the news cycle. “So tune in.

“Your attention and intentions matter.”

“Save It For The Revolution” and Pride Before The Fall are available now.