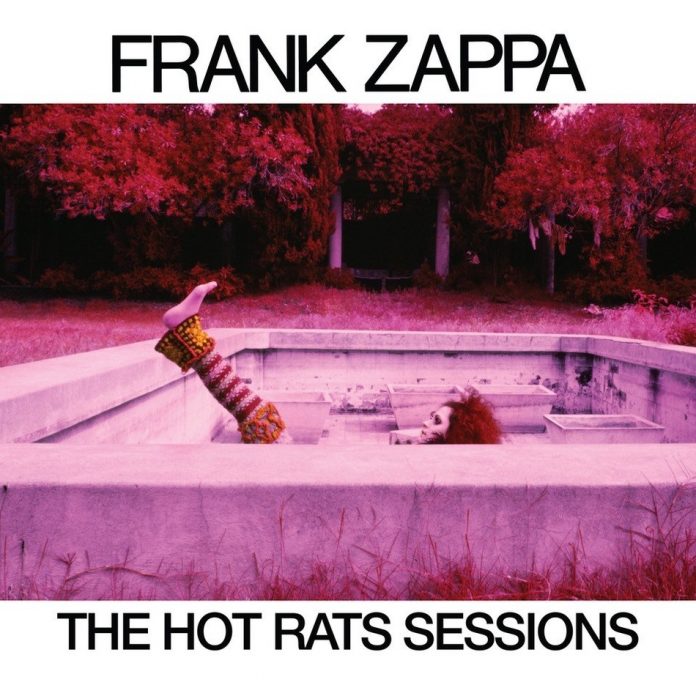 Fifty years ago today, Frank Zappa’s inimitable, groundbreaking first solo album, Hot Rats, was released, putting the songwriter and musician on the map as a virtuosic guitarist and changing the course of music forever with its conceptual, compositional and technological innovations. Self-described as a “movie for your ears,” the mostly instrumental 1969 album was a new musical avenue for Zappa following the dissolution of his band The Mothers Of Invention as he melded the sophistication of jazz with the attitude of rock and roll to create a highly influential masterpiece widely hailed today as a pioneering album of jazz-rock fusion.

On December 20, just one day before what would have been Frank Zappa’s 79th birthday, Zappa Records and UMe will celebrate Hot Rats and the legendary composer’s highly prolific 1969 period with a mammoth six-disc boxed set titled, The Hot Rats Sessions. This expansive new collection documents and compiles every composition recorded during several days in July 1969 when Zappa recorded Hot Rats and a wealth of other material that ended up being used throughout multiple releases during his lifetime. Filled with an abundance of rare and unedited mixes, work mixes, relevant Vault nuggets and complete basic tracks mixed from the original multi-track master tapes by Craig Parker Adams and mastered by Bob Ludwig in 2019, the collection provides a fascinating look into the making of this classic album, and includes essentially every musical entity that was recorded during these iconic sessions.

Overseen by the Zappa Trust and produced by Ahmet Zappa and Zappa Vaultmeister, Joe Travers, The Hot Rats Sessions will be available in a 6CD boxed set and digitally, including Apple Digital Master. This creatively fertile time in Zappa’s career is visually brought to life through a beautiful 28-page booklet featuring striking never-before-seen images of the recording sessions by Bill Gubbins, photographs of the master tapes and tape boxes, and stunning outtakes from original Hot Rats cover photographer, Andee Nathanson’s shoot with Miss Christine. Nathanson provides the collection’s new cover image and several unreleased photos, all from the same photo shoot, captured on Infrared film which gave the original album its otherworldly look. The photographer vividly details the shoot in the liner notes which also includes essays by Zappa collaborator Ian Underwood and Vaultmeister Travers and an appreciation from “The Simpsons” creator and lifelong Zappa fan, Matt Groening, who recounts his first time listening to Hot Rats as a teenager: “From the opening moments of that unforgettable drum fill, I was transported. The kaleidoscopic, calliopean, dare-I-say-callipygian, mini-masterpiece ‘Peaches En Regalia’ elevated my scrawny body into the air, spun me around like a propeller beanie, and melted my brain.”

The Hot Rats Sessions also includes a one-of-a-kind “Zappa Land” board game where fans are tasked with helping Frank get back to the studio to finish Hot Rats. All boxes preordered via Zappa.com will come with an instant grat download of the unreleased outtake, “It Must Be A Camel” (1969 Mix Outtake). Listen to the track and preorder The Hot Rats Sessions now: https://UMe.lnk.to/HotRats50thPR

Two exciting new vinyl releases will also be issued to celebrate the 50th anniversary: the original Hot Rats album will be pressed on limited edition translucent hot pink 180-gram vinyl featuring the 1969 mix mastered from the original analog master tapes by Bernie Grundman in 2008 and pressed at Pallas in Germany, and a limited edition 10″ picture disc Peaches En Regalia EP will be released in conjunction with Record Store Day’s Black Friday on November 29. The EP has rare mono mixes on Side A of “Peaches En Regalia” and “Little Umbrellas,” intended in 1969 as a promotional single, and the 1969 unreleased rhythm track mixes from the forthcoming boxed set on the flipside.

Hot Rats was composed, arranged, and produced by Zappa who played guitar on all tracks and delivered extraordinary solos throughout. One of the best-selling albums of his career, the six-song record is made up of five instrumentals, including one of his most beloved works, “Peaches En Regalia.” Frequent Zappa collaborator Don Van Vliet aka Captain Beefheart provides his unmistakable vocals to lone non-instrumental, the skronky blues-rock number, “Willie The Pimp.” Star musicians on these sessions include multi-instrumentalist Ian Underwood, violinists Don “Sugarcane” Harris and Jean Luc Ponty, bassist Max Bennett, drummers Jon Guerin (Max and Jon played together in the famed fusion outfit L.A. Express), Paul Humphrey and Ron Selico, R&B pioneer Johnny Otis and his 15-year-old son, Shuggie Otis who lays down some astounding, ahead of his time bass lines on “Peaches En Regalia” and several other tracks.

The Hot Rats Sessions offers a riveting and revealing fly-on-the-wall experience by showcasing the genesis and evolution of the Hot Rats songs as well as tracks that would be featured on Zappa’s acclaimed albums, Burnt Weeny Sandwich, Weasels Ripped My Flesh, Studio Tan and Chunga’s Revenge. Hot Rats was the first record to be recorded on a prototype 16-track tape machine and this new technology, along with Zappa’s overdub techniques, further inspired him to create and innovate. The first three and a half discs of the set are dedicated to the basic track recording sessions recorded at T.T.G. Studios in Hollywood, California on July 18, 28, 29 and 30th, and allows listeners the opportunity to experience what it would be like to be in the studio as Zappa perfected these compositions. His intense work ethic is on full display and a newfound respect is gained for the choices he made when creating the final masterwork.

The fifth and sixth discs of the set presents the original Hot Rats album with Zappa’s 1987 digital re-mix along with an assortment of extras such as vintage promotional audio ads for the album, the mono singles of “Peaches En Regalia” and “Little Umbrellas” and rare mixes of more than a dozen tracks. The Hot Rats Sessions is rife with unreleased session material and also includes the first-ever official release of “Bognor Regis,” and several unedited masters of songs like “Peaches En Regalia,” “Twenty Small Cigars,” “Toads Of The Short Forest,” “Lil’ Clanton Shuffle” and “Directly From My Heart To You.”

The Hot Rats Sessions provides an awe-inspiring snapshot of an especially productive time for Zappa, who in the year 1969 alone, outside of his own projects, produced Captain Beefheart’s outsider classic, Trout Mask Replica and the one and only album for The GTO’s, toured and had his second child. With this new, exciting deep dive, fans can explore one of Zappa’s most revered records like never before and experience how it coalesced to become one of the greatest albums of all time.

This month, just in time for Halloween, Zappa’s two complete Halloween shows recorded on October 31, 1973 in Chicago will be released on October 25 via Zappa Records/UMe. These completely unreleased live recordings total more than four and a half hours and feature songs from across his prolific catalog. Continuing the Halloween series that the Zappa Trust began in 2017 with the acclaimed Halloween 77 releases, Halloween 73 will be released as a specially designed, limited run four-disc costume box complete with a FRANKenZAPPA mask and gloves, housed in a display worthy box.