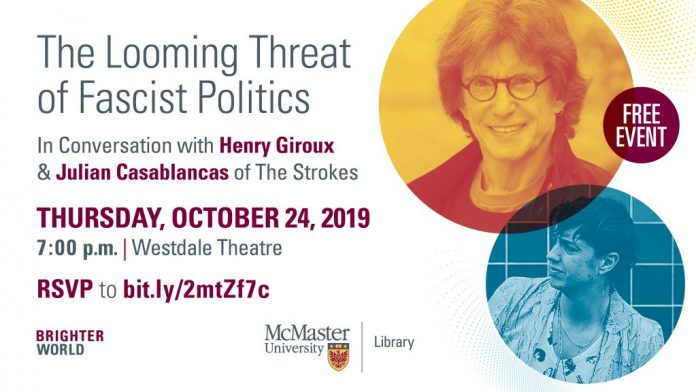 Join McMaster University Library for a conversation with Henry Giroux, McMaster University Chair for Scholarship in the Public Interest, and Julian Casablancas, the lead singer of The Strokes, on Thursday, October 24 as they discuss Giroux’s newly released book, The Terror of the Unforeseen, which features a forward written by Casablancas.

The discussion happens at The Westdale Theatre, 1014 King St. West, Hamilton and will focus on what they call the resurgence of fascist politics in the age of Donald Trump’s presidency, including the underlying causes that have produced the reactionary white nationalist regime of Trump, and how the language of hate, nativism, and racism coupled with an attack on dissent, equality, and the social contract has produced a culture of fear, ultra-nationalism, white supremacy, state terrorism, and a politics of disposability. The event is free and you can get more details here.

They will also argue that in this “age of disposability” and white supremacy, Trump’s rhetoric eschews reason and democratic principles in favour of fascist politics that is at war with any viable notion of democracy. They will argue that it is crucial to make education central to politics, and that in a time of increasing tyranny it is necessary through protests, strikes, and education to develop a massive social movement that joins together various modes of resistance to illuminate and further a systemic fight for a radical democracy.