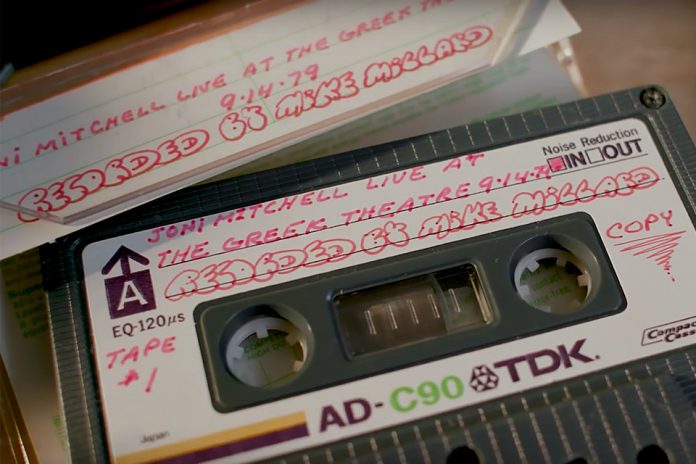 The film tells the story of late, great concert taper Mike “The Mike” Millard and an homage to his work that was undertaken by archivist and producer Erik Flannigan, who attempted to recreate the legendary taper’s methods by using the same vintage cassette deck and microphones Millard employed in the ’70s to record our two Greek Theatre concerts last year.

Millard became a legend for his high-quality bootleg recordings of artists like Led Zeppelin, Pink Floyd, Bob Dylan and many others made in and around Southern California in the ’70s and ’80’s by sneaking his equipment into concerts hidden in a wheelchair. The film features animation by illustrator Jess Rotter and Eben McCue, plus interviews with Matt Berninger, producer/archivist Erik Flannigan and Mike Millard’s friend Jim Reinstein, who pushed Millard and his wheelchair into dozens of shows.

“The most celebrated audience taper of the period, Mike Millard, recorded in and around Southern California beginning in 1974 and continued into the early ’90s. Millard’s legend is built in part on the cunning and subterfuge he used to get his nearly 15-pound cassette deck and microphones into venues like the The Forum, Santa Monica Civic Auditorium, and The Roxy.

For years I have pondered what made Millard’s recordings so good, and eventually I had an idea: What if you recorded a concert today with the same equipment Millard used in 1977? Would it sound like his tapes? Would it tap into his Midas touch?

The National was kind enough to let us test the Millard Method for two concerts at the Greek Theatre in Berkeley, California last September. These live recordings were made with vintage AKG 451E microphones and a restored Nakamichi 550 cassette deck which are identical to those used by Millard circa 1975-81. The idea was to see if we could recreate what Matt Berninger calls the “juicy sonic magic” Millard captured in his 1970s field recordings.

Together with my friend and filmmaker David DuBois, we also produced a short documentary about Millard, his recording methods, and our attempt to recreate his work at the National shows in Berkeley, a venue that is utterly unchanged since the ’70s.

With the advent of smartphones, thousands of people routinely record part of the show when they attend a National concert or any other performance. Forty years ago, when nobody would dare do that, one man made it his life’s work to preserve legendary concerts on tape.”