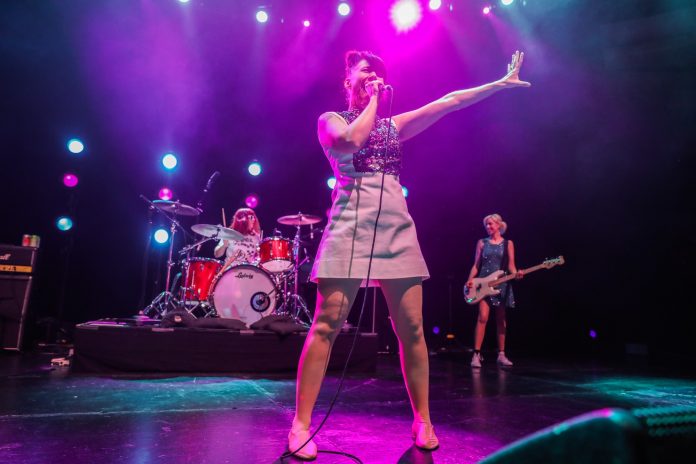 The run kicks off with a valiant return to Olympia, WA and a benefit concert for Interfaith Works Nightly Shelter, a local non-profit acting as the only shelter/homeless services program that explicitly prioritizes women and LGBT single adults in the Olympia community.

These shows sees the band performing with their iconic line-up of Kathleen Hanna on vocals, Tobi Vail on drums, and Kathi Wilcox on bass — along with guitarist Erica Dawn Lyle. Hailed by The New York Times, Rolling Stone, Pitchfork and The Los Angeles Times, the reunion has sparked critical discussion on the band’s legacy and influence on culture and music today with Entertainment Weekly, NYLON, The New York Times.

Active from 1990 to 1998, Bikini Kill is a feminist punk band that started in Olympia, WA, and later moved to Washington, DC. Billy Karren joined Kathleen Hanna, Kathi Wilcox and Tobi Vail on guitar after the band had played several shows as a three-piece. Credited with instigating the Riot Grrrl movement in the early ’90s via their political lyrics, zines and confrontational live shows, Bikini Kill encouraged women and girls to start bands as a means of cultural resistance. They used touring as a way to create an underground network between girls who played music, put on shows and made fanzines. This informal network created a forum for multiple female voices to be heard.

Bikini Kill started touring in June 1991, serving up their radical feminist punk rage to crowds across the US several times, as well as making their way through Europe, Australia and Japan. The band recorded and released a demo tape, two EPs, two LPs and three singles which are available via their independent label Bikini Kill Records. The band has just re-issued Pussy Whipped and Reject All American, available now on vinyl & CD for the first time since they went out of print 7 years ago. They also uploaded their entire catalog on streaming services last Fall. Now available for streaming on Spotify, Tidal and Apple Music, the catalog includes landmark releases from 1991’s Revolution Girl Style Now to 1998’s The Singles, which features production, guitar and vocals from Joan Jett.