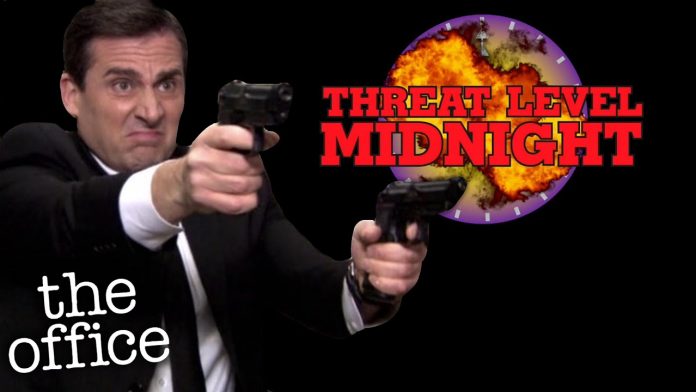 After 11 years of preparation, Michael is ready to debut his action movie. The Office presents to you THREAT LEVEL MIDNIGHT!

After secret agent Michael Scarn (played by Scott) is forced into retirement due to the death of his wife Catherine Zeta-Scarn, the President of the United States of America (played by Darryl Philbin) requests that he prevent Goldenface (played by Jim Halpert) from blowing up the NHL All-Star Game and killing several hostages. Scarn goes undercover and learns how to play hockey, killing another hockey player (played by Oscar Martinez) to make it into the game, but after confronting Goldenface, he is shot. He later recuperates but learns that the President was in on it all along. Depressed, he goes to a bar to drown his sorrows. The patrons of the bar sing a song called “The Scarn” which he danced to with his wife, which cheers Scarn up immensely. With his courage restored, Scarn is able to save the day and blow up Goldenface in the process.