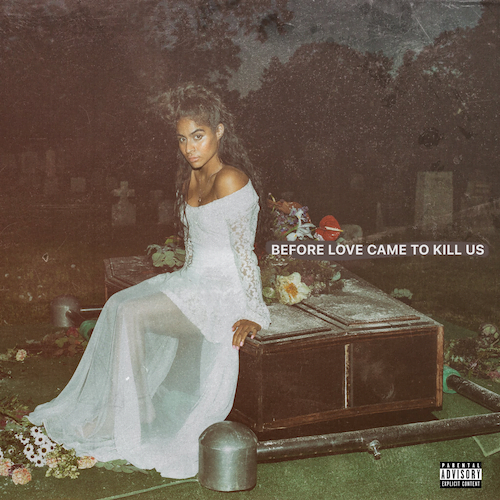 Grammy-nominated singer-songwriter Jessie Reyez has announced that her forthcoming debut album Before Love Came To Kill Us is slated for release on March 27. The album spans 15 tracks full of endearing tales of love, loss, and life’s tribulations.

Accompanying today’s announcement is Jessie’s new single and video titled “Love In The Dark”. The visual was directed by Se Oh (represented by Mad Ruk Entertainment) and features Jessie submerging and eventually getting lost in a serene body of water reflecting a starlit sky. “Love In The Dark” is a poignant song that tells the story of being there for a loved one while providing them strength as they go through life’s challenges, emphasized on an uplifting and bold melody. Along with the video launch is an MTV broadcast premiere on MTV Live, mtvU, and the Viacom Times Square Billboard. Speaking on the inspiration behind the visual / song Jessie shares “I wrote this during a really sad time in my life, I remember crying. I hope people understand how vulnerable it is.”

“Love In The Dark” follows the release of “Crazy” a cover version of the iconic Pasty Cline song and “Far Away”, a heart-wrenching song centered on the harsh reality many migrant families have experienced. It’s via Jessie’s raw vocals, triumphant spirit and harrowing yet heart tugging storylines that she has proven herself to be one of the most hyped new voices deserving of the great fanfare and critical acclaim she’s received to date.

In the past year alone, Jessie Reyez has been nominated for a Grammy award for Best Urban Contemporary Album for her sophomore EP Being Human In Public. She’s released a string of critically-praised songs, performed “Crazy” on Jimmy Kimmel Live!, as well as a duet performance of the GOLD-CERTIFIED reimagined hit single “Imported” with 6LACK on The Late Show with Stephen Colbert, a headlining tour, performances at a plethora of music festivals, and collaborations with many notable artists including Eminem, Kehlani, Daniel Caesar, Romeo Santos, Lewis Capaldi, Karol G, Bea Miller and has co-writing credits on Dua Lipa’s hit song “One Kiss” with Calvin Harris and “Promises” with Calvin Harris and Sam Smith.

Being Human In Public showcases some of her most personal and intimate moments throughout her life and is a collection of singles that were released throughout the 2018. The EP has garnered over 400M streams worldwide, overall her acclaimed catalog has garnered nearly one billion streams worldwide and her videos have garnered over 230M views. Reyez, who is set to take the stage at this year’s Coachella festival, continues to be recognized by both critics and peers alike while remaining to be a unique voice amongst them.