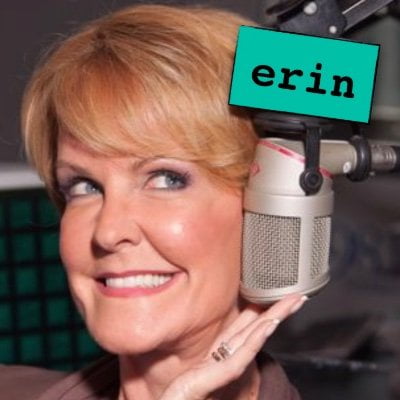 Erin Davis called CHFI 981.FM in Toronto home for over 28 years, beginning in 1988, when she began doing news on the popular Daynard Drive-in. She soon became Don’s co-host and the show enjoyed enormous ratings right through his retirement in 1999. She then hosted with Bob Magee until June 2003, when the station decided to take the morning show in another direction.

Erin’s retirement from morning radio came approximately 18 months after their only child, beloved 24-year-old daughter Lauren, died in her sleep of unknown causes in May 2015. After being approached by HarperCollins to write a book telling of her experience with grief, Erin spent much of the next two years at her laptop.

Her memoir, Mourning Has Broken: Love, Loss & Reclaiming Joy, was released in February 2019 to critical acclaim and was listed in the Globe & Mail and Toronto Star Top Ten lists for 2019. The book will be released February 18, 2020 in soft cover.

In the summer of 2003, Erin saw a lifelong dream come true when the W Network called and offered her the opportunity to host her own TV show. W Live with Erin Davis, a daily live hour-long national talk show, which featured guests and viewers discussing women’s lifestyle, health and wellness issues, hit the air that fall and lasted one year.

In the fall of 2004, Erin had the opportunity to meet and work with Mike Cooper, one of Canada’s best-known radio personalities, while she was temporarily filling in on another Toronto radio station. Erin and Mike hit it off immediately and enjoyed great success together so, when CHFI asked Erin to come back in the fall of 2005, her new friend Mike was not far behind, and the two continued to make radio magic for more than a decade.

Prior to coming to CHFI in 1988, Erin co-hosted mornings on CKO Toronto, the flagship station of Canada’s all-news radio network. She had come from CKLW Windsor where she had been the first female co-host in the powerful Detroit market. Previously, she worked as a newscaster at CFRA Ottawa.

Erin was born in Edmonton, Alberta and was raised everywhere, including Ottawa, Trenton and England. She studied Radio Broadcasting at Loyalist College in Belleville. By her second year, a typical day for Erin included attending classes in the morning, hosting a radio show on CIGL-FM in the afternoon and playing piano at a local restaurant in the evening.

Erin continues to maintain a connection to her fans with her twice-weekly journal at erindavis.com.