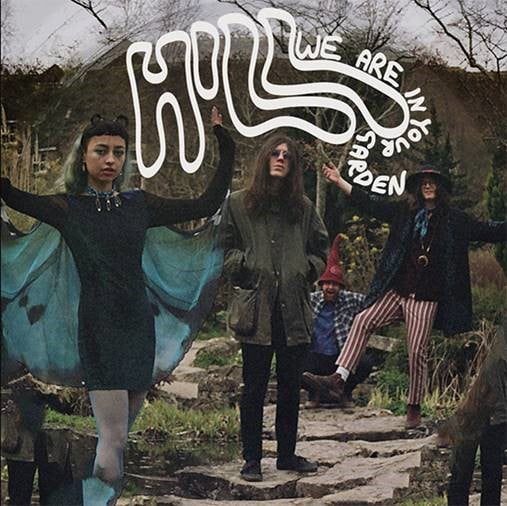 You can’t say they didn’t announce themselves or weren’t polite about it: British avant-garde jazz-rockers Hill have released their cosmically surfable new video for “We Are In Your Garden” — available now!

“‘We Are In Your Garden’ is thematically centred on an allegory of gnomes in a garden,” frontman Pete The Beet — known to his library card as Maltese-born Russian multi-instrumentalist Pete Piskov. “We are all the gnomes and the garden is the world.

“Some ‘velvet capped,’ and others who ‘don’t want to disturb.’”

If it sounds trippy, it’s because it is.

That’s who Hill is, from main composer, string strummer, vocalizer and flautist Mr. Beet, to cosmic mumbler, bassista and dancer Willow Bumble, to tom tom and symbolist James the Seel.

Their burgeoning brand of psychedelic sojourns look deeply into the future and the past, lucidly laying claim to inspiration in everything around them. “Our music isn’t just for the sake of sound,” Piskov offers. “But for the sake of life.”

They live through what and how they play, heard most recently on 2020’s EP delivery of Into Outta This World. It’s a surreal, alchemical world pillared by powerful lyricism and improvisation. “We play messengers to harmony and dissonance meeting mystery and history in an eternal dance.”

Which brings us back to “We Are In Your Garden;” first released in 2018 and now re-visited on video for release this May, the video is compiled from several years worth of footage Piskov collected on his Sony hi-8 camera, edited during the recent lockdown of their home base in Brighton, England.

So, the song: Picture yourself lying on a cool patch of grass, looking up at the bluest of skies and the fluffiest clouds you’ve ever seen, and… Oh, yeah. Imagine you haven’t been in the same sweatpants for eight weeks.

“The video emphasizes the layered quality of meaning and image,” Piskov pontificates. “The symbolism plays with concepts of self-realization and reflection.

“There are many symbols and directions and meanings behind each term,” he adds. “The mushroom being the Apple of Eden, but also considering the mycelium-like network of knowledge of self and the outer world as a part of this mythos is definitely a big one for me.

“As well as equating the Garden of Eden to right now as an assertion that we may be living an ignorant life, and are in the darkness, and are yet to bite the apple or mushroom or whatever else that will break the spell.”

They do beg your pardon, but Hill is now “In Your Garden.”

“We Are In Your Garden” is available now.