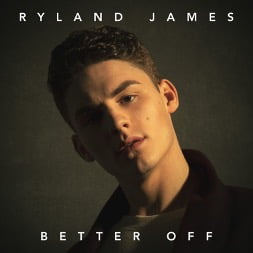 Over soft piano and a sparse beat, his undeniable voice immediately takes flight. Intimate verses give way to a rapturous refrain accompanied by a full choir. Driven by his overpowering delivery, it culminates on the ultimate breakup postscript, “I’d be better off loving myself,” spiked with soul and spirit.

“Better Off” arrives on the heels of Ryland’s recent single “Shoulder To Cry On.” Produced by Jon Levine [Alessia Cara, Dua Lipa, Drake], it has already racked up 1.5 million YouTube views and over 3.5 million Spotify streams. In addition to praise from The Honey Pop, Canadian Beats, and more, Idolator declared “Ryland James needs to be on your radar.” The momentum only continues to ramp up.

Ryland James highlighted 2019 by crisscrossing Canada and the U.S on tour with Alessia Cara, as well as making his music festival debuts at Bumbershoot and Life Is Beautiful. Returning from the road, he released his single “In My Head” which has impressively been certified Gold in Canada. Co-written amidst trips to Stockholm and London, the track highlights Ryland’s poetic songcraft and expansive vocal range. The vocals reverberate with a combination of urgent immediacy and palpable emotion. Upon release, Billboard declared that “In My Head” was an “incredibly soulful” song, adding that Ryland “shows off Adele-like qualities with a soaring chorus and emotional, heartbreak-ridden lyrics.”