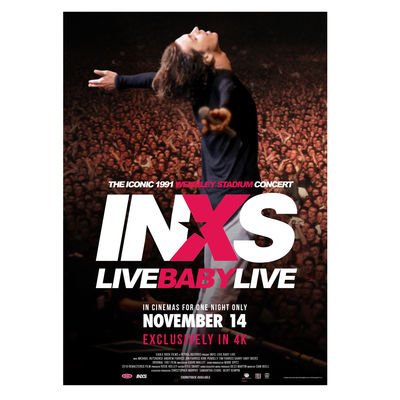 Live Baby Live, the seminal live show by INXS from 1991 is available for preorder now on 4K Ultra High Definition Blu-ray, Blu-ray and DVD. The release follows the restored film’s hugely successful debut theatrical run in late 2019, playing on over a thousand screens from Sydney to Stockholm and London to Los Angeles.

The home entertainment release features the film presented in widescreen for the first time, and in over 20 times greater resolution (on 4K UHD blu-ray) than the original DVD release. This masterclass in showmanship and musicianship has been meticulously restored over a twelve-month period from the original 35mm negative to 4K Ultra HD, and during the process a previously thought lost performance of the ‘X’ album track “Lately” was discovered and reinstated into the film, much to the fans delight.

To accompany the astonishing visual upgrade, the audio is now presented in Dolby Atmos and DTS-HD Master Audio (Blu-ray only), DTS 5.1 Surround and Dolby 5.1 Surround – all created by Giles Martin, the band’s Executive Music Director, and Sam Okell at Abbey Road Studios.