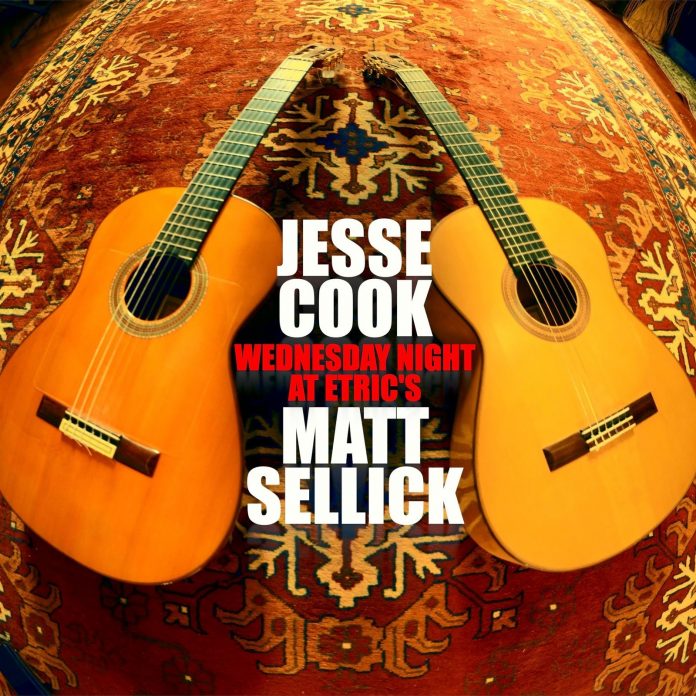 The multi-talented virtuoso pulled the track deep from his archives at the enthusiastic urging of friend and Canadian flamenco guitarist, composer and recording artist extraordinaire Matt Sellick; the duo collaborated for the 2020 re-record of the long-special track.

“Late one night in the late nineties, I recorded a song of mine at my friend Etric’s,” Cook recalls. “It was a hip loft downtown, but there was no recording studio; we just set up a few mic’s and started making music.

“Now, 23 years later, my friend Matt convinced me to revive the song.

“He must have been, what? About five years old when it came out?”

“Well…” Sellick chimes in. “I remember learning this tune the summer I turned 16. It was right when I started taking guitar really seriously, and it was one of those pieces that got me really excited to learn and find my own sound.

“It’s so exciting to revisit it, years later, and record it with Jesse himself!

“Teenage me would never have dreamed of this.”

2020 has been a year filled with milestones for Jesse Cook, most notably the 25th anniversary of his breakthrough release, Tempest and its title-bearing single.

He was initially set to mark the occasion with a 25-date cross-country concert special when the country shut down for COVID-19.

The unforeseen delay inspired Cook to pivot; he released a new version of “Tempest”— “Tempest 25”— the creation of which also served as an experiment of sorts along the way.

“The recording started as a simple idea,” he explains. “I’d use this pandemic time to record a new version of ‘Tempest’ and see if it would sound different.

“Have I changed as a musician, or as a producer?”

While the talent remains steadfast, the list of accomplishments and accolades continue to grow; Jesse Cook holds ten gold and platinum studio albums with combined sales exceeding two million copies, five concert DVDs and live discs, five PBS specials, multiple awards including a JUNO win, 11 nominations, three Canadian Smooth Jazz Awards, a Gemini Award, and an Acoustic Guitar Magazine Player’s Choice Silver Award — plus thousands of concerts around the world over and above millions of views and streams across platforms.

“When you write these things, at first, they’re like your kids,” Cook says, breaking down his songwriting process. “You think of them as yours.

“But then they grow up and start to live a life all their own. Other people record them, use them in their own work, or get married to them, live, celebrate, even heal to them.

“I’ve relished going back to this track and collaborating with Matt — both as a friend and a fellow artist.

“I think Matt is one of Canada’s finest flamenco artists today,” he continues. “I am so proud of the musician he has become, and feel honoured to have been an inspiration to him in some small way.

“Though… All this does make me feel really o-o-o-ld!”