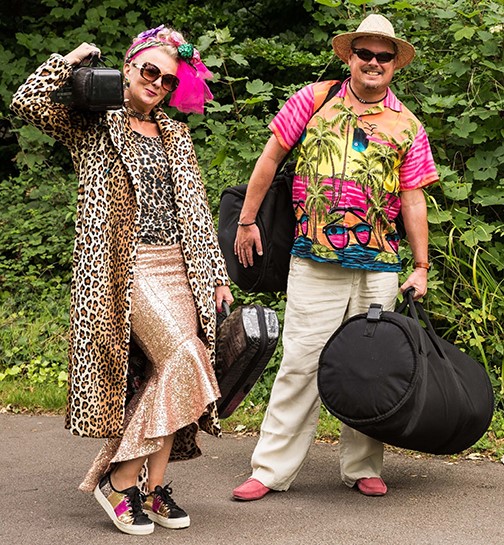 Though the COVID-19 pandemic has, and continues to make a negative impact on billions of peoples’ lives all across the globe, Kim Cypher, the U.K.-based jazz performer, is spreading a bit of positivity with her latest, lockdown-inspired single, “Crazy Times.” As one of the most exciting saxophonists, vocalists and composers in the modern age of music, Kim is using her platform to remind us to treasure the things that we can still enjoy despite social distancing regulations — in this case, it’s music.

“Crazy crazy times, these are crazy crazy times,” Kim repeats in the upbeat, saxophone-driven chorus, before the listener is met with a thought-provoking spoken word passage about how “compassion” and “kindness” are the key elements to effectively surviving “the new normal.”

Not only does the four minute-spanning jazz track emanate an undeniable sense of positivity and hope, but it even offers the listener a brief moment of mental escapism from the overall headache that has been 2020. This sentiment is reflected, as well, in the Latin-inspired tune’s accompanying music video, which sees Kim, her longtime husband — drummer Mike Cypher — and a number of happy-go-lucky locals dancing together in a colourful, graffiti-decorated underpass found in the world-renowned saxophonist’s hometown of Cheltenham, England.

The smile-inducing video for “Crazy Times” inevitably displays the power of music and how it can bring people together, even during the worst of times.

Though she’s been an avid jazz musician since the age of 9, Kim made her debut as a solo artist at the end of 2016, after releasing her debut album ‘Make Believe.’ She received astounding reviews and became a nationwide success, which resulted in sell-out shows all across the U.K. between 2017 and 2018. The following May, her sophomore effort, ‘Love Kim x’ was released for the world to hear. It featured a large collection of original music as well as her own tasteful takes on some well-known classics. ‘Love Kim x’ received critical acclaim and was even listed as one of the Top 10 jazz albums of 2019 by Bebop Spoken Here, the popular online jazz magazine.

Last year, Kim was highlighted as “one of the U.K’s most popular players,” in Sammy Stein’s award-winning book, ‘Women In Jazz’. Come 2020 and the author featured Kim in a follow-up release entitled ‘Gender Disparity in U.K. Jazz’. The much-beloved book gives readers an inside look at the U.K. jazz scene, its history of gender disparity issues and how these problems can be made different for the future of the scene to come.

Though live shows seem like nothing but a speck of dust in the far reaches of our memories, Kim has continued to perform live sessions via her own Facebook page. On top of that, she’s been working hard on a weekly collaborative music project called ‘The Twilight Jazz Sessions’ along with a number of fellow jazz musicians — including American guitarist B.D. Lenz — from the U.K. and U.S.. ‘The Twilight Jazz Sessions’ can be found on Kim’s YouTube channel.