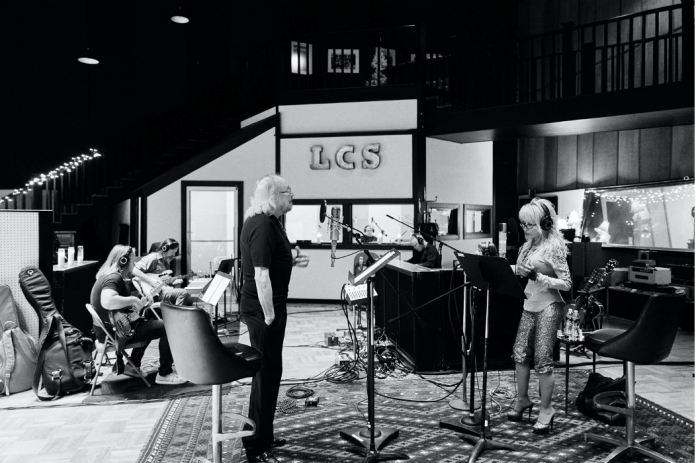 Gibb continues to receive widespread attention ahead of the release, including an extensive profile at The New York Times, who praises, “Gibb’s voice on ‘Words of a Fool’ is strong but also spectral…Nearly six decades after he first sang on a record, it remains one of the most otherworldly instruments in popular music.” He was also recently featured as part of Rolling Stone’s “Musicians On Musicians” issue speaking with Jason Isbell and, last month, was a guest on “The Tonight Show Starring Jimmy Fallon.”

In addition to the new album, Gibb is the subject of an acclaimed new documentary, The Bee Gees: How Can You Mend A Broken Heart, directed by Frank Marshall. Out now on HBO Max, the Washington Post heralds, “magnificent…thorough and beautifully appreciative,” while The Hollywood Reporter calls it, “a warm blast of musical nostalgia” and the A.V Club asserts, “a fascinating, unprecedented story.”

Of recording GREENFIELDS, Barry Gibb shares, “From the first day we stepped into RCA Studios in Nashville (the very place where Elvis, Willie, Waylon, Roy, the Everly Brothers and so many other legends made their magic) the album took on a life of its own. I couldn’t be more grateful for the opportunity to work with Dave and all the artists who stopped by. They were all incredibly generous with their time and talent. They inspired me more than words can express. I feel deep down that Maurice and Robin would have loved this album for different reasons. I wish we could have all been together to do it…but I think we were.”

“I’ve Gotta Get A Message To You” with Keith Urban
“Words of a Fool” with Jason Isbell
“Run to Me” with Brandi Carlile
“Too Much Heaven” with Alison Krauss
“Lonely Days” with Little Big Town
“Words” with Dolly Parton
“Jive Talkin’” with Miranda Lambert, Jay Buchanan
“How Deep Is Your Love” with Tommy Emanuel, Little Big Town
“How Can You Mend A Broken Heart” with Sheryl Crow
“To Love Somebody” with Jay Buchanan
“Rest Your Love On Me” with Olivia Newton-John
“Butterfly” with Gillian Welch, David Rawlings