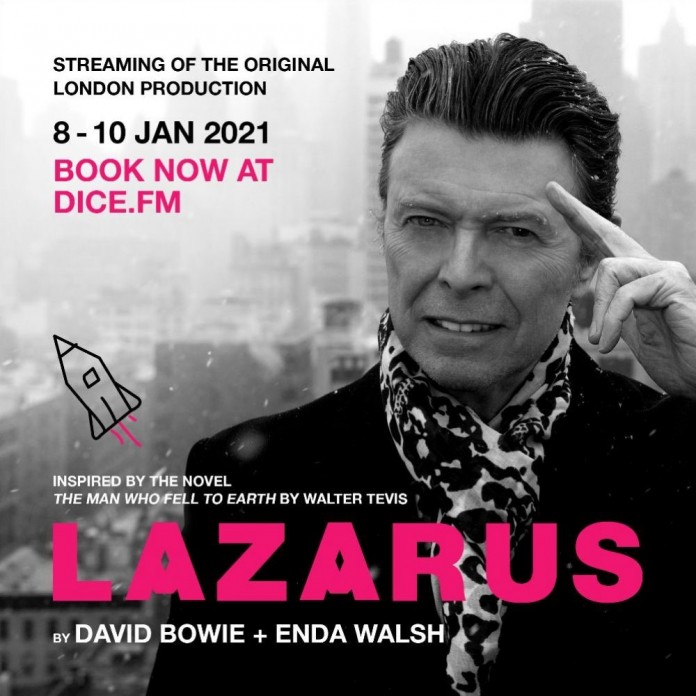 To remember David Bowie on his birthday and to mark the fifth anniversary of his untimely death, producers Robert Fox and RZO Entertainment Inc are exclusively releasing the stream of the London production of Lazarus, captured live on stage. This will be the UK premiere of the filmed version of this remarkable show.

The livestream event will include multiple showings across four different zones running from January 8th, 2021 (Bowie’s 74th birthday) to January 10th, the fifth anniversary after his death. Visit Dice.fm for streaming times and ticket information.

Lazarus includes songs from Bowie’s iconic catalogue as well as new songs written for the stage including the title song, Lazarus.

Inspired by the book, The Man Who Fell To Earth, by Walter Tevis (“The Queen’s Gambit”) Lazarus focuses on Thomas Newton, as he remains still on Earth – a ‘man’ unable to die, his head soaked in cheap gin and haunted by a past love. We follow Newton during the course of a few days where the arrival of another lost soul – might finally set him free.

Michael C Hall (“Dexter”, “Six Feet Under”) stars as Newton, the character famously portrayed by David Bowie in the 1976 screen adaptation of The Man Who Fell To Earth directed by Nicolas Roeg. Lazarus co-stars Sophia Anne Caruso (“Beetlejuice” on Broadway) and the production is directed by Ivo van Hove (“All About Eve”, “Network” and “A View From The Bridge”).

This live-streamed event will be available for three performances only in multiple time zones (GMT, AEDT, EST, PST, CST) from Friday 8 to Sunday 10 January 2021.