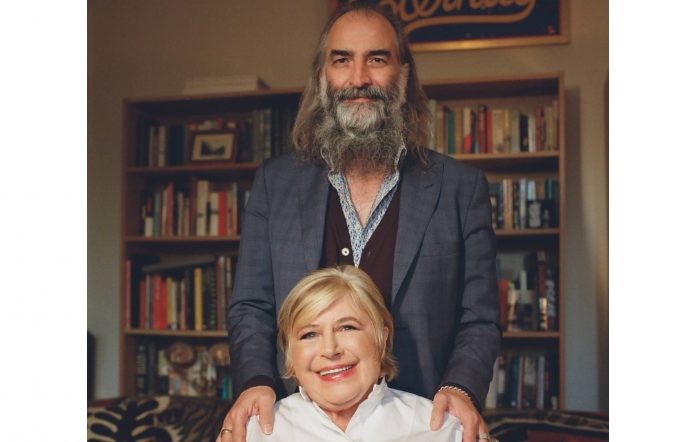 On April 30, Marianne Faithfull with composer and multi-instrumentalist Warren Ellis, will release She Walks in Beauty, one of the most distinctive albums of her long, extraordinary life and career. Recorded around the earliest days of the Covid-19 lockdown–during which the singer herself became infected and almost died of the disease–She Walks in Beauty fulfills Faithfull’s long-held ambition to record a full album of poetry with music, and features musical friends Nick Cave, Brian Eno, cellist Vincent Ségal and producer-engineer Head (PJ Harvey, Thom Yorke).

She Walks in Beauty finds Faithfull drawing deep on the works of Shelley, Keats, Byron, Wordsworth, Tennyson and Thomas. Her vocal performances, set to Ellis’ subtle collages of sound, draw out the vibrant living matter in these great poems, renewing them with the complex, lived-in timbres of her voice. It’s both a radical departure and a return to her original inspirations as an artist and performer.

For his part, Ellis describes the music of She Walks in Beauty as a kind of musique concrete, incorporating street sounds with a range of acoustic and electronic instrumentation and manipulation. “My preferred way of making music is to leave a lot of it to chance, to let accidents happen,” he says. “I’ve been moving away from structures in things. This music is me attempting to push forward. I think it’s as good as anything I’ve ever done,” he adds, “in terms of the spirit of it and the process I went through to make it.”

That process would eventually come to include contributions from Nick Cave, who played piano on many of the tracks; Brian Eno, who created sound textures for “La Belle Dame Sans Merci” and “The Bridge of Sighs”; and Vincent Ségal, who added cello Shelley’s liminal, otherworldly “To The Moon,” and Byron’s late night lament “So We’ll Go No More A Roving,” among others.

Faithfull first developed a passion for the English Romantic poets in her A Level studies with one Mrs. Simpson at St Joseph’s Convent School in Reading, before leaving for London at the age of 16. She has returned to poetry for inspiration many times since: whether on 1979’s Broken English, an album which featured her setting to music Heathcote Williams’ poem of eviscerating rage, “Why’d Ya Do It,” or on subsequent albums, such as 1995’s A Secret Life, which featured the poems of her friend Frank McGuinness, or 1998’s Seven Deadly Sins which explored the work of Kurt Weill and Bertolt Brecht.

Still, the works chosen for She Walks in Beauty hold special pride of place. “I wasn’t in doubt,” says Faithfull. “I’ve been thinking about it for so long, this album, it’s been in my head for so long, I think I really knew exactly what I wanted. I just picked the poems I really loved, and I can’t help but say I think I was very lucky. We got it.”