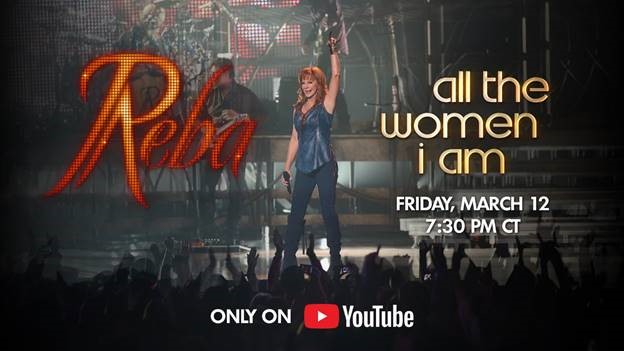 Country icon Reba McEntire is set to premiere her All The Women I Am concert special exclusively on YouTube this Friday, March 12, marking the first time the concert has been available digitally and in its entirety, including her signature “Fancy” encore. Filmed in 2011 at the Cajundome in Layfayette, LA, the recording features performances of Reba’s greatest hits including “Is There Life Out There,” “Turn On The Radio” and more. The special will premiere at 7:30pm CT and Reba will celebrate with fans through a chat on her YouTube channel HERE.

“2011 was the last time we got to go out and play a big arena tour, and I’m so glad we captured this show on film. I know it’s not the same as being there in person, but I hope this gives my fans something to enjoy until we can get back out there on the road safely,” shares Reba.

Recently, Reba returned to CBS’ breakout hit “Young Sheldon” as the fiery character June, Dale’s ex-wife. She will make her third guest appearance on the sitcom this Thursday, March 11 at 7pm CT in an episode title “A Pager, a Club and a Cranky Bag of Wrinkles.”

Last year, Reba released two additional concert specials with YouTube, 1990’s Reba In Concert and 1994’s Reba: Live. The specials were a massive success with over 100,000 fans watching in just the first three days. The Country Music Hall of Fame member also re-released her legendary album, Rumor Has It, last year in celebration of the 30th Anniversary.

Multi-media entertainment mogul Reba McEntire has become a household name through a successful career that spans across music, television, film, theater and retail. The Country Music Hall of Fame and Hollywood Bowl member has won 16 ACM Awards, 15 American Music Awards, 9 People’s Choice Awards, 6 CMA Awards, 3 GRAMMY® Awards, a GMA Dove Award and was a 2018 Kennedy Center Honors recipient, in addition to multiple philanthropic and leadership honors. Reba has celebrated unprecedented success including 35 career No.1 singles and selling over 56 million albums worldwide. Earlier this month, Reba received her 51st CMA nomination as well as her 60th Top 10 hit on the Billboard chart extending her record for the most among female artists. Reba has now collected Top 10 hits in five straight decades and is the fourth artist to achieve the feat alongside George Jones, Willie Nelson and Dolly Parton. The Oklahoma native and Golden Globe® nominated actress has 11 movie credits to her name, a lead role on Broadway in Irving Berlin’s Annie Get Your Gun and starred in the six-season television sitcom Reba. Her brand partnerships include Dillard’s, REBA by Justin™ and she was named the first female and musician to portray KFC’s iconic founder Colonel Harland Sanders in their celebrity colonel campaign. Reba just launched her very first Spotify original podcast, Living & Learning with Reba McEntire, with her former Reba TV show co-star Melissa Peterman. Together with their guests including Dolly Parton, Leslie Jordan, Kristin Chenoweth and more they explore a variety of topics including aging, cancel culture, dating and more.