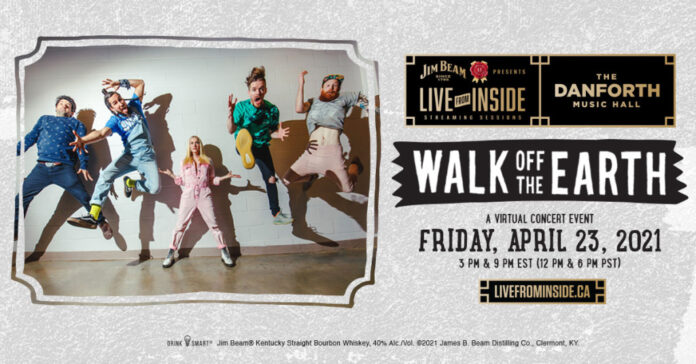 Jim Beam Bourbon Presents Live From Inside returns to Danforth Music Hall with two performances from musical phenomenon, Walk Off the Earth on Friday, April 23. Tickets for the virtual performances are on sale now at www.livefrominside.ca with a portion of ticket sales benefiting the Unison Benevolent Fund.

Based just outside of Toronto, Walk off the Earth is a boundary-pushing musical group that has headlined the famed Red Rocks Amphitheater and Wembley Arena, sold out the historic Sydney Opera House, and notched a top 10 single for thirty straight weeks in Canada as well as a top 25 in the US. Their collaborations have ranged from songs with Snoop Dogg and Sara Silverman, to Keith Urban and Steve Aoki, and their original songs have sold millions of copies as well as notched billions of YouTube views.

Walk Off the Earth’s YouTube covers have won them Streamy awards, their renditions of the national anthem have been performed at the NBA Finals (to glowing reviews from the Toronto Raptors players), they’ve played on Ellen and Good Morning America multiple times, and their songs have continued to top the charts. “Red Hands” (#1 at AAA), “Fire In My Soul” & “Rule The World” (multi-platinum in Canada).

The band has just released their latest single “How It Is”

Jim Beam Bourbon Presents “Live from Inside” showcases incredible live performances broadcast from favourite venues across Canada. Viewers enjoy multi-camera performances with crisp visuals and concert quality audio. Fans are able to purchase tickets, register for access, and then stream performances in high definition from the comfort of their homes or on the go.