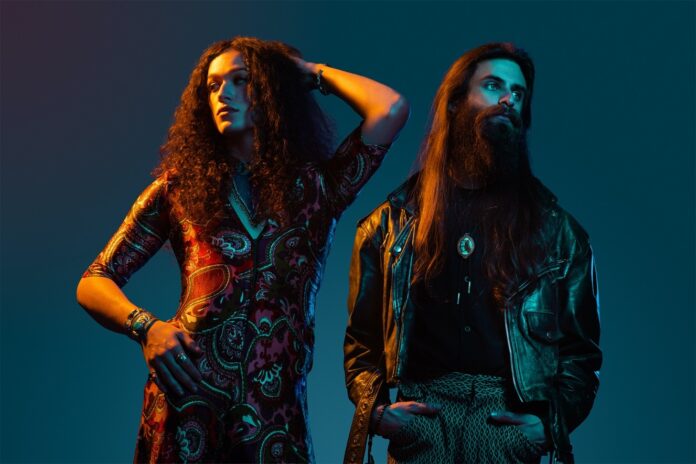 The songs bring Crown Lands back to their prog-rock roots and point the way to a limitless future while connecting the group to their legendary countrymen Rush, the band that served as their initial inspiration, in ways they never could have expected. “Context: Fearless Pt. 1” is a full-circle moment for Crown Lands as their admiration for Rush is returned back to them by three producers who were vital to Rush’s iconic career. Bowles reflects, “To have grown up with nothing but the purest adoration for this band, to have finally scaled the impossible summit together and sit at the table with our heroes is a humbling surreality unlike anything else. Working with these legendary producers-now-friends is something we hold near and dear to us. If life is a wheel, please let it spin.”

Early last year, Crown Lands revisited “Context: Fearless Pt. 1”, a song they had been working on for years. They cut early demos with Terry Brown, Rush’s producer for ten years – a dream come true for two massive Rush fans. After touring and performing the song live, it got sharper – so they decided to re-record it. This time around, they travelled to Nashville to collaborate with Nick Raskulinecz, Rush’s producer in their later years. “These guys are the two most important producers in Rush’s career,” says Comeau. But the day before the scheduled session, Rush’s legendary drummer Neil Peart died after a fight with brain cancer. Crown Lands assumed the trip was off, but Raskulinecz texted them with a message: “you guys need to carry the torch—you need to come down here.” In the studio, the producer brought out a drum kit that Peart had used on the 2007 Snakes & Arrows album for Bowles to play – in what they call “the most spiritual experience in my life.” Finally, to produce the vocals, the duo hooked up with David Bottrill—who remixed Vapor Trails, Rush’s 2002 comeback record. “He’s the mythical third Rush-associated producer,” says a disbelieving Comeau. “This one fucking song had the triad of Rush producers!”

The second new song, “Right Way Back,” is a tribute to Peart that came almost effortlessly. They brought it to Nashville as a rough demo, working out the chorus and writing the lyrics on the spot. “It’s about the feeling of trying to carry on from where your heroes left off,” says Comeau.

The final recording for “Context: Fearless Pt. 1” is an epic, hydra-headed beast of a song, complete with a full-scale, Mandalorian-style sci-fi music video which premiered on today with Rolling Stone.
Crown Lands enlisted Blake Mawson, their collaborator on the “Leadfoot” video, to help them realize their concept.

“When Crown Lands approached me about working on a second video together, I was blown away by the scope of the vision they had in mind for their upcoming release,” said Mawson. “In the video, Crown Lands saw themselves as space travellers on a diplomatic mission to spread music to new worlds. A sort of retro-galactic space fable. Among their stop-overs on this voyage is a fallen civilization on a planet where music and hope had been lost for generations.” Watch the seven-minute intergalactic Orc-filled adventure here.

Crown Lands’ Juno-nominated, self-titled debut album, produced by Grammy-nominated Dave Cobb, was released in the summer of 2020, to widespread acclaim from the likes of Guitar World, Kerrang!, and American Songwriter; coverage from the BBC and the CBC; and placements in campaigns for Peloton, the Canadian Football League, and the incomparable “Hockey Night in Canada” franchise. Most recently, Crown Lands debut album was nominated for “Rock Album of the Year” alongside a nomination for “Breakthrough Group of the Year” at 2021 Juno Awards. But without the ability to tour during a global pandemic, the pair was frustrated by their inability to bring their blistering, hard-charging music to the people. So, like most of us, they adapted. They released an acoustic EP, Wayward Flyers Volume 1, including a cover of Neil Young’s “Birds.” They also focused on the politically charged song and video “End of the Road,” which pays tribute to the Indigenous womxn, girls, and two-spirits who have gone missing on the Highway of Tears in North British Columbia.

Hailing from Southwestern Ontario, powerhouse Canadian rock duo Crown Lands –Kevin Comeau (guitar, bass, and keys) and Cody Bowles (vocals and drums) – are a startling fresh jolt of energy, making music that brings together a range of influences from folk and blues to psychedelic prog rock. The group’s name is indicative of their musical ambitions: “Crown Land” is territorial area belonging to the monarch—or, as Bowles (whose own heritage is half Mi’kmaw, an Indigenous tribe from Nova Scotia) puts it: “Crown Land is stolen land and we are reclaiming it.”