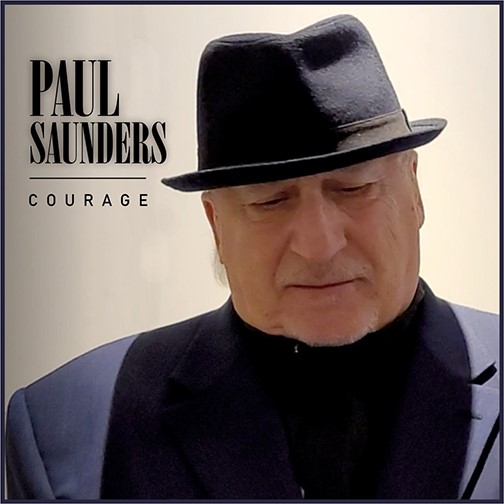 Nothing ventured, nothing gained… With those words to live by, long-time Canadian singer/songwriter, actor, writer, and producer Paul Saunders has ventured back to his creative musical roots for his new single “Courage” — available now.

The proverb of “nothing ventured, nothing gained” dates back to the late 14th century and the time of Chaucer; in the spirit of the revered English author’s timeless works, Saunders has always aimed to write songs that connect, inspire and will also stand the test of time. Taking on the venture of recording those songs as a solo artist closes the circle from where he started in his artistic career to where he has arrived today.

“Courage” is from Saunders’ recently released debut album, It’s About Time! An emotional, soulful ballad featuring his expressive tenor, “Courage,” and all the tracks on the 12-track LP, boast a stellar line up of some of Canada’s finest stage and studio musicians — including the late Michael Fonfara, Danny Weis, Danny McBride, Glen Morrow, Stacey Heydon, Igor Romanyk, Demo Cates, Gary Taylor, and Michael St Clair. The album was produced by Saunders and Gord Paton and recorded at Toronto’s Sky Blue Studios, Eastern Sound, and The Rhythm Ranch; Saunders wrote or co-wrote 10 of the songs on the album.

While the character in “Courage” laments not having the “courage to find the way,” Saunders himself has had the fortitude and drive to pursue multiple creative passions throughout his career — the first being music. His grandfather owned The Bermuda Tavern on Yonge Street, fostering an early love for music and performing in Saunders that started on stage at Toronto’s Yorkville clubs, and carried him to L.A. to a songwriting contract with Epic.

Over the ensuing years, Saunders’ career path took him in more diverse directions; a versatile and sought after performer with multiple skills, he has appeared in over 60 film, television and stage productions — including lead roles in both Jesus Christ Superstar and Hair.

Recording and releasing an album as a solo artist, however, is an accomplishment Saunders always dreamed of while carving out a successful career on stage and screen. “I am so happy to actually release my first solo CD in my long and diversified career,” Saunders says. “After all these years, this is something I have dreamed of doing for decades — and now it’s released to the global community on the EMG label.

“I am humbled and excited to see how the future unfolds for me and my music.”

In honour of Earth Day 2021, Saunders contributed “Courage” to the Heal the Earth project, which brought together legendary Canadian artists such as Murray McLauchlan, Gowan, Tommy James, and Andy Kim with independent artists for a virtual music celebration on Earth Day, April 22. The online event raised funds for Earth Day Canada and was headed up by Sandy Graham, owner of Cashbox Magazine Canada, and actor, musician and Order of Canada honouree Tom Jackson.

After all of the diverse artistic journeys he’s travelled, Saunders knows it’s about time to return to music and reach the milestone of releasing his first solo recording. “The business for me right now is nothing ventured, nothing gained, and I have the time and the tenacity to want to continue to write, record and perform.”