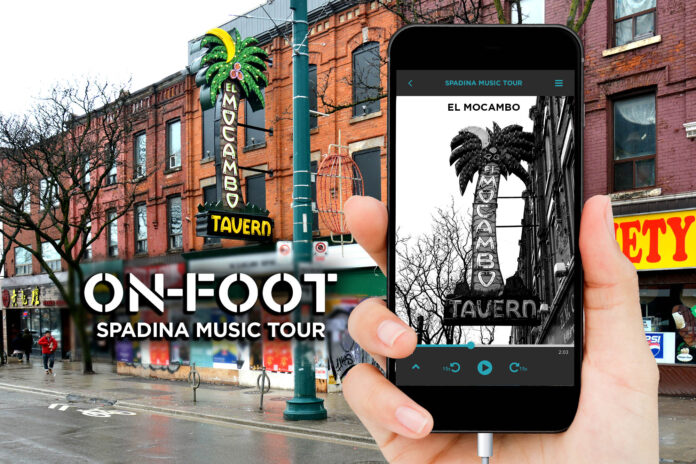 More than just a backstage pass, the ON-FOOT app allows old fans and new, an inside look at Toronto’s most musical neighbourhoods and the artists and songs that made them legendary.
The mobile app–available on both iOS and Android–is launching two new immersive walking tours that will educate and entertain music lovers–especially those who have been missing live shows!

Transport yourself back to a 1970s popular gay disco that evolved into one of city’s earliest punk hotspots and find out which Toronto bar floor is immortalized in The Tragically Hip’s campfire anthem, “Bobcaygeon.” The fully immersive walking tours feature rich interactive media, historical reference photos, and striking audio-visual elements.

The new tours available on July 1st, 2021 include:
Spadina Music Tour
With stories of early speakeasies and saloons, underground DIY venues, and immortalized shows, this tour will explore the creation and evolution of one of Toronto’s most musical neighbourhoods. The tour features 15+ captivating stories written by Lana Gay of Indie 88, 90+ photos, and historical reference images from the Toronto Archives and Toronto Public Library.

“Technology, particularly mobile, has provided a way for people to explore new cities and even their own in a socially distant way,” says Tristan Tiggeloven, Producer/Creative Director, Pop Sandbox. “After the successful launch of our first season of tours we decided we wanted to find a way to celebrate Toronto’s rich music history. From iconic venues to the artists who made them famous we felt especially in these Covid times it was important to highlight and commemorate these spaces and artists who were particularly hard hit during this pandemic.”

In addition to the newly launched music tours the app features haunted walks in both Toronto and Amherstburg, a Queen West and a Graffiti Alley tour. By using your phone’s GPS, interactive experiences (audio stories, archived images, and music) are triggered when the user arrives at various points of interest. ON-FOOT is available for iOS and Android, and can be downloaded from the App Store or Google Play.