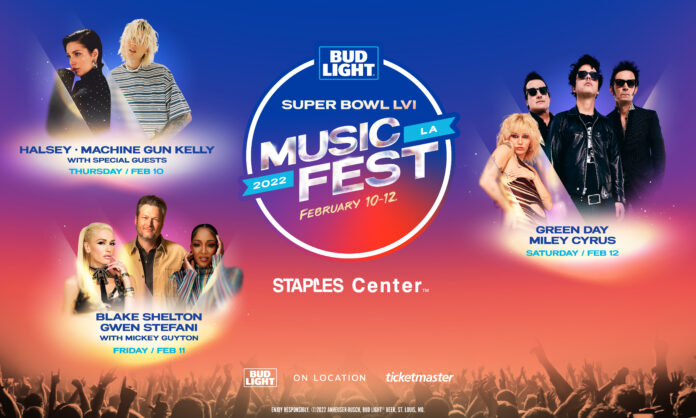 On Location, the official hospitality partner of the National Football League (“NFL” or “The League”), and Bud Light, the official beer sponsor of the NFL, today announces the return of the Bud Light Super Bowl Music Fest. Celebrating its third year, the three-night festival gives football fans and the entire city of Los Angeles an opportunity to connect with the music they love from Thursday, February 10th through Saturday, February 12th at the STAPLES Center in downtown LA.

Thursday night kicks off with the incredible performances from both Halsey and Machine Gun Kelly as headliners for the night. On Friday Night, the Bud Light Super Bowl Music Fest features the dynamic Blake Shelton and Gwen Stefani with Mickey Guyton. Saturday’s Super Bowl Eve concert lineup brings a power line up to the stage, with Green Day and Miley Cyrus.

In 2019 and 2020, the Bud Light Super Bowl Music Fest redefined the role of music at one of the biggest sporting events in the world with unforgettable cross-genre performances from all-star acts. The three-day entertainment spectacular has featured unique and never-before-paired line-ups with artists including Bruno Mars and Cardi B.; Post Malone and Aerosmith; Maroon 5, and Dan + Shay with a surprise performance from Demi Lovato; Ludacris, Ciara, Migos, T.I., Lil Jon, and Young Jeezy; DJ Khaled & Friends Meek Mill, and Megan Thee Stallion; as well as a special night with Guns N’ Roses and special guest Snoop Dogg.

Over 75,000 music and NFL fans attended the festivals in 2019 at the State Farm Arena in Atlanta, GA and in 2020 at the American Airlines Arena in Miami, FL. The Bruno Mars and Cardi B. concert in 2019 was the highest-grossing event in State Farm Arena’s 20-year history. The New York Times called the Bud Light Super Bowl Music Fest the “Extended Super Bowl Halftime Show” in 2019 and declared the fest an “Epic Bash” in 2020. People Magazine declared the event has “Super Bowl dominance” and Billboard raved about the “All-star lineup.”

In addition to top-level music talent spanning a range of genres, the festival features surprise appearances by celebrities and athletes. An array of premium seating is available, including suite and club packages plus options for premium hospitality.

The Bud Light Super Bowl Music Fest continues to redefine and expand the experience of music at one of the biggest sporting events in the world. For more information, please check out @SBMusicFest or visit superbowlmusicfest.com.

On Location is the official hospitality partner of the NFL. For more details on tickets and packages to the Super Bowl visit onlocationexp.com/nfl/super-bowl-tickets.