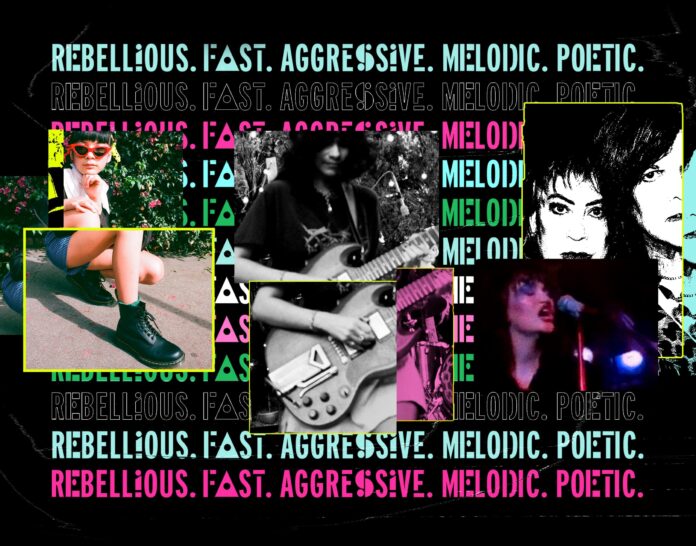 Alongside archival footage and unflinching interviews, highlights include early Whiskey a GoGo Shows, like the time Backstage Pass opened for Elvis Costello, the genesis of The Linda Lindas’ “Racist, Sexist Boy” and X and Hole’s early shows. Watch the full film here: https://www.drmartens.com/us/en/dm-presents-women-in-punk-la

Of the film filmmaker Ali Roberto says: “Last year, Dr. Martens asked me to produce and direct a 7-part docuseries over quarantine. It was an intimate look at how bands were surviving with canceled tours and plans and how they were being active within their communities and giving back. This year, Dr. Martens came to me and gave me the option to choose any scene in Los Angeles for the episode. I’ve always been fascinated with the Los Angeles punk scene and how punk resurges into the mainstream when we are in political and social upheaval. Punk has been coming up in the mainstream a lot in the past few years, unsurprisingly. From Olivia Rodrigo recreating all of Hole’s iconic imagery to the Linda Lindas going viral with ‘Racist Sexist Boy’ — Punk’s DIY and ‘fuck you’ attitude is becoming a rally cry for those yearning for societal change. The marriage of these two things is undeniable. Womxn in music have a lot up against them from sexist labels trying to control their image to handsy show bookers trying to cop a feel. This film showcases their strength and rebellion from the very first all female punk band in LA to the youngest and newest that are making the biggest waves. This story has something for everyone, even if you are unfamiliar with punk.”

“Interviewing Exene and Patty was an absolute dream come true. I have looked up to these women for a long time. They adorned my walls growing up as I yearned to move away from my hometown and immerse myself in music and art. My filmmaking partner Sébastien Paquet also had the same dreams growing up in France, and now we create films together. Seb has been the main cinematographer for Korn for the past 16 years. He is the one behind the camera at every show and every rock and metal festival in the US. Together, we create docufilms and music videos for many artists you know and love.”

Jeanette D. Moses’ high-energy work is known best for capturing the intimacy of New York City’s creative communities and in her Dr. Martens Presents episode, Moses explores the sanctity of DIY spaces, the importance of all ages shows, and how the DIY scene has evolved amidst years of sociopolitical and economic change. At the foundation of these topics, lies the central pillar of New York’s DIY Punk Scene – community.

Rebelmatic, A Place To Bury Strangers and THICK share their thoughts on the ever-adapting genre and the people who’ve shaped their lives. Catch the full episode here: https://www.drmartens.com/us/en/dm-presents-diy-ny

Later in the series, filmmakers Ambar Navarro, Fredgy Noël, Ali Roberto, will highlight a myriad of scenes across genres, generations and groundbreaking musicians who through a plethora of archival footage and unflinching interviews.