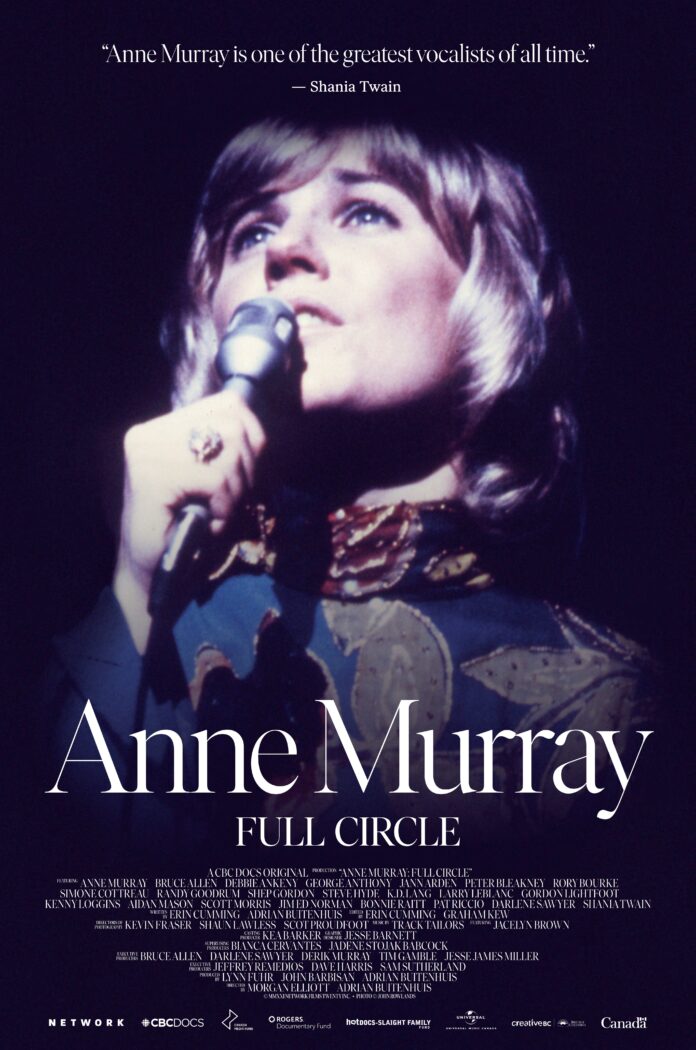 New feature-length CBC documentary Anne Murray: Full Circle, produced by Network Entertainment, in association with Universal Music Canada, celebrates the career of Canadian singer Anne Murray. The film will premiere as a special one-night cinema event at select Cineplex theatres across the country on Thursday, December 2, followed by its exclusive broadcast and streaming launch on CBC TV and CBC Gem on Friday, December 17 at 8 p.m. (8:30 p.m. in NT).

Anne Murray: Full Circle will take audiences on a personal and emotional journey showcasing in-depth interviews with Anne exploring her evolution as a ground-breaking, trailblazing female Canadian artist from the ‘60s and ‘70s to a global superstar, having sold more than 55 million albums in pop, country, and adult contemporary music over her 40-year career.

“It’s a surreal and sometimes unnerving feeling to watch your life replay itself on screen, but I am honoured to have my story told by such a creative team,” says Anne Murray. “Seeing the old footage and hearing the words of my dear friends and collaborators takes me back to both the good times and the not so good ones. Throughout my career, the loyalty and support of my fans have been a constant. They were there with me every step of the way, even when others were not. I hope they enjoy this trip down memory lane.”

Anne Murray: Full Circle includes never-before-seen footage from Anne Murray’s personal archives, along with interviews with a star-studded cast of artists, collaborators, and colleagues, including Shania Twain, k.d. lang, Bonnie Raitt, Jann Arden, Kenny Loggins, and Gordon Lightfoot. Anne Murray’s unforgettable music and hit songs are celebrated throughout the film with 19 iconic music tracks that span Anne’s entire career, including “Snowbird,” “You Needed Me,” “Nobody Loves Me Like You Do,” “Could I Have This Dance,” “Danny’s Song” and more.

Cineplex will hold a special one-night screening event of the film in 50 theatres across Canada on Thursday, December 2. For tickets and theatre locations please visit https://www.cineplex.com/Movie/anne-murray-full-circle

Following its theatrical premiere, CBC will offer the exclusive broadcast and streaming debut of the film on Friday, December 17, at 8 p.m. (8:30 p.m. NT) on CBC TV and CBC Gem.