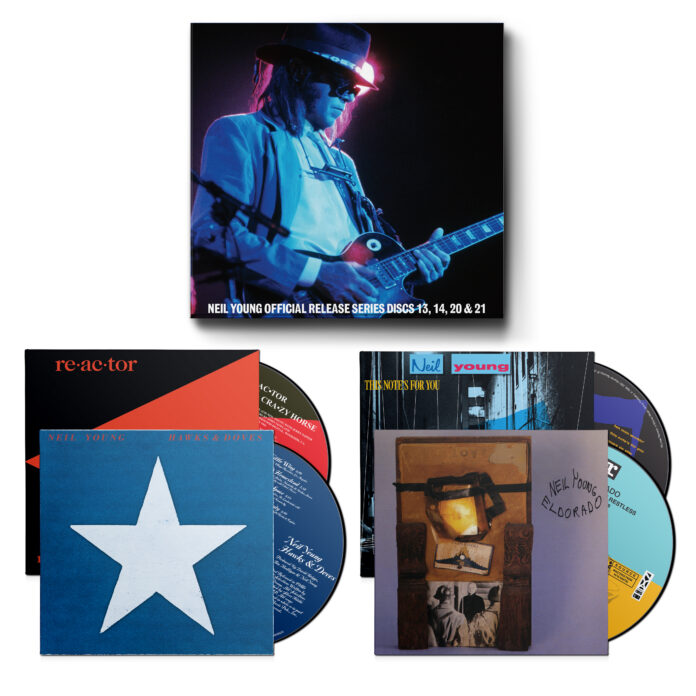 Today, Neil Young announces the release of the fourth installment in his Official Release Series (ORS): a box set that includes his classic ‘80s records Hawks & Doves, Re•ac•tor, and This Note’s for You, as well as his Eldorado EP, previously released only in Japan and Australia. Both vinyl and CD box sets will be available for pre-order today and out on April 29th. Fans can purchase the ORS Vol 4 CD box set through all retailers; the vinyl box set will be available at indie stores and The Greedy Hand Store at Neil Young Archives (NYA). All Greedy Hand Store purchases of ORS Vol 4 box sets come with free hi-res digital audio downloads from the Xstream Store at NYA.

The ORS Vol 4 collects an eclectic set of decade-spanning sounds. Hawks & Doves (1980) revisits his folk roots and explores some of his most country-leaning offerings; the blistering Re•ac•tor (1981) showcases a stomping set of heavy, overdriven rock with Crazy Horse; and This Note’s for You (1988) casts Young as a big band leader, belting out intricately arranged blues. The Eldorado EP (1989) is full of feral distortion and earthy crunch featuring Young backed by The Restless (Chad Cromwell and Rick Rosas). It includes two thundering tracks — “Cocaine Eyes” and “Heavy Love”— not available on any other album. Eldorado will launch on most major DSPs upon the release of the box sets. Those who pre-order ORS Vol 4 now will receive an instant download of “Cocaine Eyes.”

The other three albums included in the ORS Vol 4 box sets are currently available digitally at Neil Young Archives and most major DSPs.

Only at NYA can you find Young’s music in the highest possible digital audio resolution alongside a seemingly infinite store of archival files. It’s also the home of Young’s virtual daily newspaper, The Times Contrarian, and The Hearse Theater, where you can see rare footage and stream live shows. NYA is a fittingly sprawling repository for Young; few artists—perhaps none—have explored such a vast spectrum of sounds and styles over more than half a century. ORS Vol 4 collects a large swath of his diverse and compelling ‘80s work, testifying to the legendary songwriter’s gift for sonic shape-shifting.