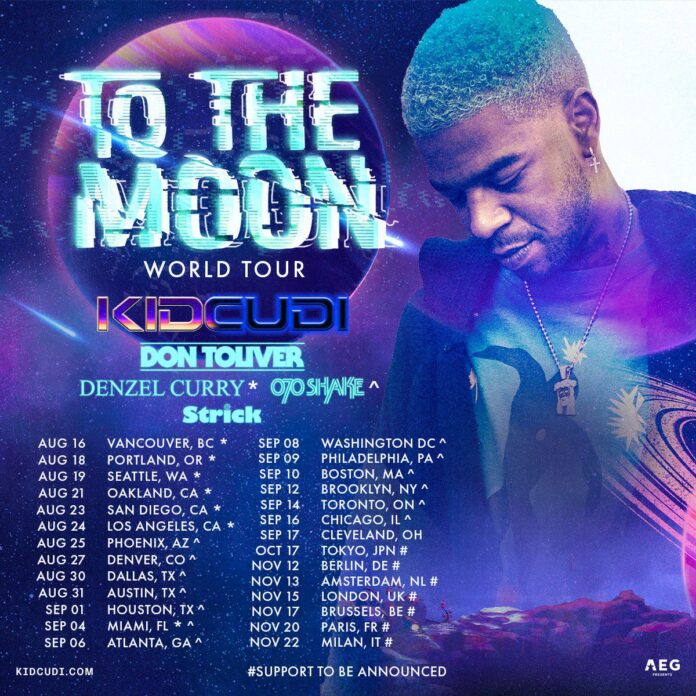 Multi-hyphenate artist Scott Mescudi aka Kid Cudi announces his To the Moon – 2022 World Tour in 27 cities across North America, Asia, and Europe. The tour kicks off with 20 North American shows starting in Vancouver on August 16, and will include stops at The Kia Forum in Los Angeles, Barclays Center in Brooklyn, American Airlines Center in Dallas, and the United Center in Chicago. Then in the Fall, “To The Moon” travels to the Toyosu PIT in Japan and all over Europe, including The O2 in London, Verti Music Hall in Berlin, AFAS Live in Amsterdam, Palais 12 in Brussels, and the Zenith in Paris, with Milan closing out the tour at Fabrique on November 22.

Kid Cudi is supported throughout the North American leg by Don Toliver and Strick on all dates, with additional support on select dates by Denzel Curry and 070 Shake. Support for all international dates to be announced at a later date.

Along with “To The Moon,” Kid Cudi announced the inaugural “Moon Man’s Landing” festival in his hometown of Cleveland, OH on September 17, 2022. Kid Cudi curated the lineup to include some of his favorite artists such as Playboi Carti, HAIM, Don Toliver, Dominic Fike, Pusha T, Jaden, 070 Shake, and more.

On September 30, 2022 Kid Cudi will debut “Entergalactic,” an animated music series he created with Netflix. A brand-new studio album also titled “Entergalactic” will accompany the series. The first single “Do What I Want” was released on all platforms June 10.

Kid Cudi is riding high off a wide array of acclaimed work in music, television, and film, from his 2020 album Man on the Moon III: The Chosen which debuted at number two on the Billboard 200 to serving as musical guest on Saturday Night Live, to collaborating with Ariana Grande on the original song “Just Look Up” for Netflix’s Don’t Look Up and starring in A24’s 2022 horror-hit X. Kid Cudi also recorded the single “Stars in the Sky” for the soundtrack to the film Sonic the Hedgehog 2 in 2022.