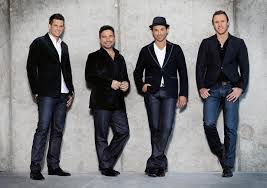 The Tenors – Canada’s multi-platinum, JUNO Award-winning vocal group announce the first 18 Canadian dates of their UNDER ONE SKY 70 city North American tour. The tour kicks off in Thunder Bay, ON on September 16, with tickets going on sale beginning Friday, May 8 at 10am local time. Current Canadian tour listing below. Additional cities to be added.

The tour announcement coincides with the upcoming release of the group’s fourth studio album, UNDER ONE SKY out on May 4. The Canadian band with multiple #1 Billboard Classical Crossover albums under its belt “have talent to burn” and “killer singing voices” raves The Toronto Star and “pitch perfect harmonies” says Examiner.com. The music of Clifton Murray, Victor Micallef, Remigio Pereira and Fraser Walters is rich and soulful, spanning powerful anthems, classic covers and original songs penned/co-penned by The Tenors themselves.

UNDER ONE SKY is a 13-track album combining a mix of originals alongside new interpretations of familiar favourites. Highlighting their signature blend of classical and contemporary pop, the record includes the popular hits “Lean On Me” (Bill Withers) and “Who Wants To Live Forever” (Queen) as well as the soaring original title track “Under One Sky” and the inspirational “New Day’s Begun”. The foursome dedicates the classic Joe Cocker track “You Are So Beautiful” to their mothers and all mothers around the world, while “My Father’s Son” pays universal homage to dads. A deluxe edition will offer fans three bonus tracks plus a group version of “You Are So Beautiful.”

In March, The Tenors taped their next anticipated PBS TV special, also entitled Under One Sky, slated to begin airing in June (check local listings).

“This music is our most exciting and most diverse we’ve recorded to date,” said The Tenors. “We are so thrilled to be sharing this with the world!”

Over the past several years, The Tenors have been selling out concerts across Canada, the U.S. and the UK and have performed over 500 live shows on five continents. In 2014 The Tenors performed for the Obamas at the prestigious National Christmas Tree Lighting and as part of Cirque de Soleil’s One Night for One Drop annual Las Vegas spectacle in support of water conservation. They also appeared as special guests alongside Seth Rogan and Orlando Bloom for Free The Children’s “We Day” in San Francisco.