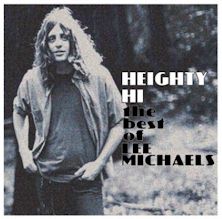 The recluse of classic rock is back. On November 20th, Manifesto Records will release Heighty Hi, a single CD retrospective of Lee Michaels’ biggest hits during his 7 album run at A&M Records from 1968-1973. It’s his first compilation in print in over five years. His massive 7 CD box set arrives that day as well.

Heighty Hi – The Best Of Lee Michaels, is a 20 song, single CD compilation of his biggest hits, including his Top 10 hit single “Do You Know What I Mean,” as well as FM Radio anthem “Heighty Hi.” Also included are other singles and FM Radio staples such as “The War” and “Keep The Circle Turning,” as well as “Goodbye, Goodbye,” a non-LP b-side. All of the twenty songs have been digitally remastered from the tapes to bring out the highest sound quality from the classic recordings.The CD packaging will feature amazing archival photos of Michaels, as well as an 8 page booklet with comprehensive liner notes and quotes. The name of the 20 song CD compilation originates from one of the catchiest drug songs ever written “Heighty Hi,” the closing track off of his 1969 album, Lee Michaels.

Here is a great clip of Lee performing on The Music Scene, an ABC show hosted by comedian David Steinberg!

On the same day, Lee Michaels, The Complete A&M Album Collection brings together the seven albums that singer/keyboardist Lee Michaels released on A&M Records between 1968-73. Though his singles have been compiled a few times, the full albums were only on CD once before and are now long unavailable. Famous for one irresistibly catchy single, (“Do You Know What I Mean,” a Top Ten hit single in 1971), Michaels covered more ground on his albums—from heavy organ rock and R&B, to politically slanted pop, to hippie-friendly sing-alongs and proto-grunge guitar jams. Taken together, this catalogue is one of the buried treasures of its era.

Michaels and his drummer Frosty were the first Organ/power drums duo to hit the stage. They were followed by synth/drum bands like Silver Apples and Suicide, but no significant rock n’ rollers until the Flat Duo Jets in the late 80s and the White Stripes and Black Keys in the 90s (both of whom utilized guitar instead of keyboard).

After retiring from the business in the early 80s, unlike most beloved musical iconoclasts, he turned his back on interviews and performance opportunities for decades, preferring to focus on his ultra-popular Los Angeles based restaurant Killer Shrimp and playing at home. That Devil Music said, “Lee Michaels is one of the great lost artists of the rock ‘n’ roll ‘70s. A soulful singer with an incredible range, and capable of expressing great emotion, Michaels was also a talented songwriter and keyboard player, his performances based around his trusty Hammond organ years before folks like Deep Purple and Uriah Heep pushed keyboards to the front of their songs.”