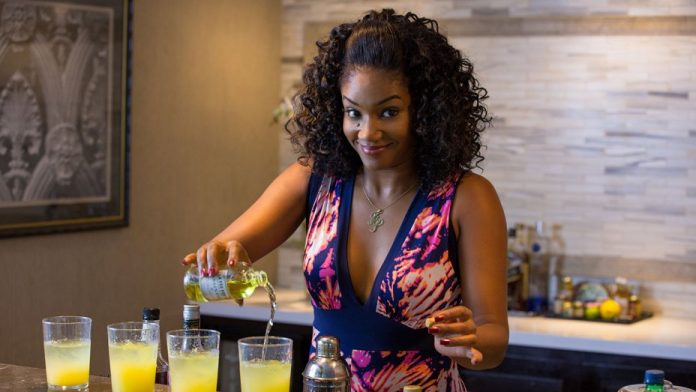 The Girls Trip star accepted her best-supporting-actress New York Film Critics Circle prize with an exciting, entertaining, and vibrant (and funny) speech that will be the best thing you read this week:

O.K., this is not a grapefruit. This is a microphone; I’m much better with that. The Tiffany special [a special cocktail]—I wanna call it the Tiffanicity-tini. It’s delicious. I’ve had two, and I do feel like magic.

O.K. First, I want to thank God, because without God, my mama and daddy wouldn’t have put their two uglies together and they wouldn’t have made me. That was all God right there. He put two crazy people together to make this one awesome, crazy person. So I super-thank God. I want—[looking at the statue above the stage, a many-armed goddess holding several different items] I’ve been staring all night. Y’all see this?

All night I’ve been staring at this bitch. I’m trying to figure out “Who is this bitch?” Her name is Quan Yin. Quan Yin is a goddess in Hinduism. I’m here to teach you. And when I look at her, I feel like I’m looking at myself. Like she taking a nap, but she doing a lot of stuff all at the same time. That’s what my life has been like the last year. I’m asleep, but I’m woke. I’ve never been more tired in my whole entire existence, and I feel like I do all these things.

Like, she got some weed or some drink in both hands; she holding on to the rings, you know, because she trying to get a ring on it. She working out—she got dumbbells. She holding feathers because she take care of animals and creatures. She got an eraser to erase the bullshit. She holding on to some seeds or a pinecone, which means she’s trying to produce and create, and that’s exactly what I’m trying to do. I’m not trying to get pregnant yet, Michael, but I’m working on it. B. Jordan.

You see these plates that she got? I don’t know if these are plates or if this is distributing medication, because I worked in a pharmacy for two days. This brings us to feed people. I’m going to go with that’s a plate to feed people, because she feeds people with spiritual knowledge. That’s where I’m going because sometimes I do that too.

She got the sun in her hand because she light this motherfucker up. That’s me too! Then I think she got a cracker because she get hungry. And then she’s got another little thing in her hand . . . [speaking up to the lights] Can y’all light this? Y’all have it lit up all night—I get up here and you turn it off. I seen the bitch blink twice. It scared the fuck out of me. Did y’all see her blinking? I was like, “I know I didn’t take my drugs today.”

She’s got a key over here that looks like a heart, and I’m always holding my heart. For me, in this business—I’ve been doing stand-up comedy since I was 15. I’m 21 for the 17th year now. And I’ve been in a lot of different projects.

So now that I get to meet the critics, first off, thank you, guys. I don’t even—I don’t read reviews. I don’t. The most reviews you’ll see me read is something that either my publicist sends me and says, “Read this,” and I’m like, “You read it,” because if it hurt my feelings I’m going to cuss their ass out in my soul, and then I’m going to pray for them, and I’ll laugh. Because I’m super-sensitive. I don’t mean to be so sensitive, but that’s just who I am. And I’m not afraid to admit it.

So if you said something, thank you. I don’t care if it’s positive or negative. I appreciate you; I’m glad you see me. Because it’s been so many years nobody saw me.

When you’re a little kid going through the [foster-care] system, you wonder, “Does anybody even know I’m alive?” To be able to be this example to so many youth—there’s so many people like me that you guys have no clue about. But they coming. Because I kicked the fucking door open.

And I want to give a special shout-out to all the people that supported me throughout all these years. My best friend, Selena. I’ve known you since we were 12 years old. I walked up to you like, “You’re going to be my friend” and you was like “What?” And you’re still my friend.

I want to say thank you to Malcolm Lee. You hired me for this job. I was like “For real? I’m going to get to do the grapefruit? Because I practiced that for years.” That’s how I got my first Corvette. So I knew if they hired me, I would do a good job, at least in that scene if nothing else.

And I’m going to put this in my special, and I don’t care if somebody try to sue me, because they shouldn’t have been a cheating-ass mother.

So, there’s a scene where I tell Regina [Hall] all the things I would do for her, that I got her back, no matter what. I’m like, no matter what, I got your back. I’m talking Timberland boots, hot bricks—I don’t care. We’re going to give him some Ambien, night night. And then, when he sleep, we’re going to burn your name in his dick. And then we’re going to put mud and salt on it so it can keloid over, and then it will be ribbed for your pleasure. And then when he wake up, we’ll look him dead in his eyes, and we’ll tell him right to his face to keep your name out these bitches’ mouths.

Now, they took it out of the movie. But I like to tell everybody about it, because these are the things I think about at night. Don’t hurt my feelings, Michael B. Jordan. I’m just putting in my card, player. I’ll check your credit score, though, to make sure you qualify.

I tried to get an audition, and my agent is like, “Oh, they only want to see names.” And I said, “You tell them I’ve had a name since 1979, and it’s Tiffany motherfucking Haddish. You get me in there.” And they finally got me in there, and I did a pre-read, and another read, and another read—and finally I got to do the Skype audition for Malcolm, which I thought was crazy as hell because I’m used to Skype sex. So I didn’t know . . . it worked out good. I didn’t take my shirt off. Nothing inappropriate happened, so good job. That was a great joke; that was the truth.

Anyway, moving on. So thank you, James Lopez, for putting my name in the hat. I want to say thank you to my makeup artist, Dionne Wynn, who I’ve known for a long time and I’ve been trying to work with forever, and when I saw her in the trailer of Girls Trip, I knew that it was meant for us to be together, and I’ve been taking her with me everywhere I go. I’ve been doing a lot of projects since Girls Trip, and girl, you’re going to be doing makeup until your fingers get arthritis. Arthritic—you know what I’m saying. They’re crippled up.

I’ll keep you with me, because she makes me feel pretty. I think it’s about how you feel. I think this whole business is about how you feel, and what feeling you put out into the world, and how you make other people feel. When you feel good about what you’re doing, in my mind, you make other people feel good. I’m going to tell you—on set, working, with Queen Latifah, Jada Pinkett Smith, Regina Hall, and them allowing me to be myself, and they wasn’t no haters. They was like, “Keep going.” Queen Latifah would egg me on into the most craziest stuff, and I was like, “She’s got to be my friend in real life, because we’ll never go to jail.” And she is my friend in real life, and we haven’t been to jail yet.

I’m super-grateful and thankful. I’m thankful for you critics; I’m learning a lot about you guys. The only critics I ever known before this was Siskel and Ebert, and then when they passed, I was like, “Oh, well.” I ain’t going to lie to you: all my stuff comes from TV. Who’s the new movie-critic TV show? Is there one? Get it together, y’all. Y’all should have a TV show so we know who you are.

I don’t read reviews. Like I said, I’m sensitive. I hope that you guys get a better feel for who I am now. I’m wearing a pretty dress. I don’t know if my coochie is showing right now or not. If it is, it’s cool, because I’m wearing God’s panties and my panties on top of them. Some of y’all don’t get that joke, but you will later. I’ve got that throwback.

I hope everybody who’s in here has the most awesome 2018. I hope that your cycles come on time. If you don’t want it to come, I hope it don’t come. I hope every man in here is super-happy and super-rich, and if you’re not happy, change your thought patterns and start having happy thoughts. Because it’s your fault you’re not happy. Nobody’s in control of your emotions but you.

That’s what I did. I just got me a better house in South Central L.A. No roaches, no rats. Cherry hardwood floors. That’s because my check came in. Does this come with a check? I’m going to show it to my grandma, and she’s going to be like, “Somebody write nice in calligraphy?”

I’m just reading what’s up here right now. I want to say thank you to Eric. Eric, I don’t know if you had anything to do with me getting this award. I don’t know how you feel about me standing here talking this long, and I don’t care. But I thank you. You were the first person to greet me when I walked into the room, and you smiled and looked me dead in my eyes and shook my hand. You weren’t afraid to talk to me.

The thing I hate the most is people that come up to me, and I can smell fear on them. It makes me want to fuck them up. I hate fear. I know fear is fuel for other things; fear will help you move toward something great. But don’t be trying to put that shit on me. Come up to me happy; come up to me with a smile; find your joyful self if you’re talking to me. If you coming up to me scared, it’s going to make me talk to you crazy.

Think of me as a wild dog, because I’m confident. I smile. Come up confident, and look me dead in my eyes, I’m going to be cool with you. Come up scared and act like a bitch, it’s how you’re going to get treated.

That might be too much information, but I don’t care. If this was a black party, everybody would be laughing. I’m teaching ‘all something today.

My name is Tiffany Haddish. I want to give it up to this lady back here. And to God, my grandma, my mama, my daddy, and everybody who taught me not to be afraid.