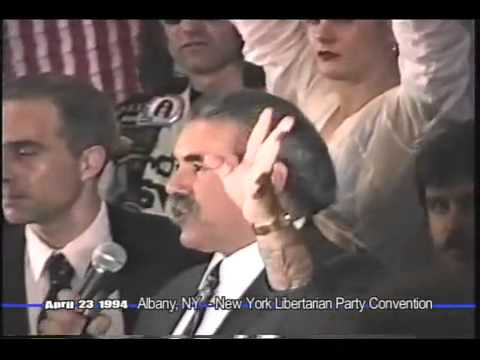 During his radio show on March 22, 1994, Stern announced his candidacy for Governor of New York under the Libertarian Party ticket, challenging Mario Cuomo for re-election. Stern planned to reinstate the death penalty, remove highway tolls to improve traffic flow and limit road work to graveyard shifts hours. Stern announced that once those three goals were accomplished, he would resign and pass the governorship to his lieutenant. At the party’s nomination convention on April 23, Stern won the required two-thirds majority on the first ballot, receiving 287 of the 381 votes cast; James Ostrowski finished second with 34 votes.[114] To place his name on the final ballot, Stern was obliged to state his home address and complete a financial disclosure form under the Ethics in Government Act. Stern applied for an injunction as he wished to avoid stating his income; the request was denied by a judge on August 2. Stern withdrew his candidacy in an on-air press conference two days later, saying: “I spend 25 hours a week telling you all the most intimate details of my life … One fact I’ve never revealed is how much I make and how much money I have … it’s none of your business.”