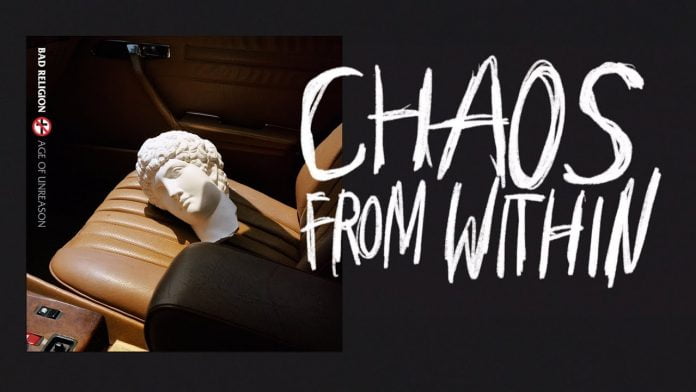 Acclaimed Los Angeles punk rock band Bad Religion have released a new album entitled Age of Unreason. Since the group’s formative years innovating their iconic fast and melodic sound, the band has steadfastly advocated for humanism, reason, and individualism. Today, as these values are in decline, and nationalism and bigotry are on the rise, Bad Religion’s message has never been more essential. Age of Unreason delivers a powerful and inspired rejoinder – a political and deeply personal treatise on all they believe in.

Bad Religion first came together in the sprawling suburbs of Los Angeles. As intellectually minded young punks, they injected their primal sound with melodic hooks and soaring multi-part choruses as well as a philosophically critical world view. Instead of addressing customary topics of teen alienation and a generalized oppression – they wrote about evolution, religion, the natural world, science, world history and the enlightenment. Founding members Greg Graffin, Brett Gurewitz and Jay Bentley were eventually joined by guitarist Brian Baker of hardcore pioneers Minor Threat, and most recently by guitarist Mike Dimkich and drummer Jamie Miller.

Age of Unreason is Bad Religion’s 17th studio album and was co-produced by Carlos de la Garza. Since the band’s formative days in the burgeoning punk underground, they have amassed a worldwide following and penned numerous hit singles including “21st Century (Digital Boy.)” But now, at a point when many artists might be content to release something merely serviceable, Bad Religion has delivered a timely work of immense power. Age of Unreason is one of their very best. Society’s step backwards has propelled the legendary band decidedly forward.

Age of Unreason is an album that reveals as much about the band as their targets. Amidst the justifiable outrage, there is underlying introspection and a reaffirming of beliefs. For Gurewitz. “Lose Your Head” is an intensely personal song about surviving volatile times by focusing attention inward. It marries his passion for science with a lifetime of contemplative practice. “I ain’t superstitious but hey, do you know a good exorcist? / despite darker tendencies I’ve always had a strong bias to exist / and while recent developments seem like bad news for humanity / self-pity is always a case of mistaken identity / don’t lose your head before you lose your head” According to Gurewitz the song “grapples with today’s deeply troubling political events” in the context of two of his main interests: cognitive science and Buddhist philosophy. “Particularly the Buddhist concepts of “no self” and “mindfulness of death” which in practice can heighten one’s compassion for others and an appreciation of life.”

Age of Unreason is both a dire warning and testament to resilience. The overall message being – seek truth about the world and oneself. As Graffin, who holds a PhD in the history of science, says, “When I saw all these headlines about how terrible our world had become, I started doing a lot of reading. I read about the French revolution, the American Revolution, the Civil War, and I started to recognize that this is a pattern of history and something we should never venture into, there are ample warnings against it. Every school child should know this but it’s hard to get people to read about these things. Maybe this album can help. Because right now, with social media, we are just playing a version of kill the guy with the ball.”