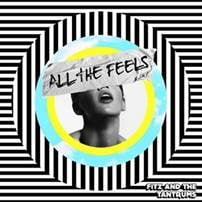 Fitz and the Tantrums has announced details for their much anticipated, forthcoming album. Titled “ALL THE FEELS,” the multi-platinum band’s fourth full length release arrives everywhere on September 20.

Frontman Michael “Fitz” Fitzpatrick said: “So many highs and lows this last year but we’ll make it through together. We are so excited to finally share what we’ve been working so hard on. ‘ALL THE FEELS’ has all the emotions. We hope you love it as much as we do.”

Fitz and the Tantrums also unveiled today the album’s title track and its companion music video – watch it below.

“123456” is currently ascending the Hot AC radio chart, following back-to-back weeks as Alternative radio’s #1 most added song. The track has already been featured in high profile spots on MLB Network and will highlighted in the forthcoming Netflix film “Otherhood.” Released earlier this spring, “123456” marked the first new music from Fitz and the Tantrums since 2016’s acclaimed self-titled album, which featured the band’s biggest hit to date, “HandClap.” The global smash has logged more than 400 MILLION worldwide streams while enjoying top 5 chart success at multi-format radio outlets nationwide. Likewise, the 2x-Platinum certified song’s official companion video has amassed more than 80 MILLION views to date on YouTube alone.

Fitz and the Tantrums are currently in the midst of a massive North American co-headlining tour with Elektra labelmates Young The Giant. The band’s cross-country trek kicked off earlier this month with a sold-out show at the iconic Red Rocks Amphitheater in Morrison, CO, and continues into August, highlighted by a stop at Lollapalooza in Chicago on August 1 and a special, homecoming show at The Forum in Los Angeles on August 10. Support comes from indie-pop trio COIN (June-July) and indie-alt songstress Alice Merton (August).

* = shows/festivals not including Young The Giant