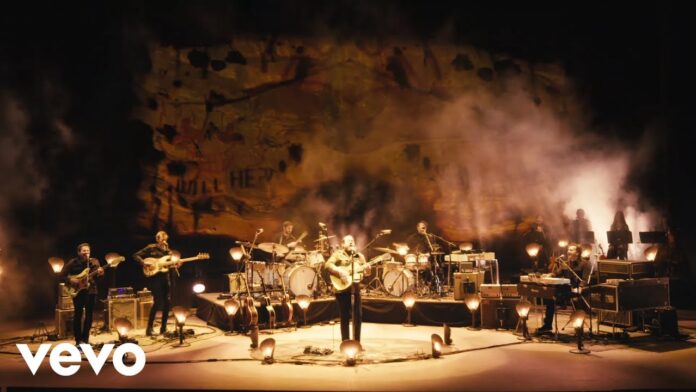 Red Rocks 2020, the forthcoming live album from Nathaniel Rateliff, is set for release on July 16 via Stax Records. The 18-track live record was recorded in an empty Red Rocks Amphitheatre during Rateliff’s mid-September run of socially distanced shows, which was limited to 125 attendees per night in the 9,400-capacity venue. Through Red Rocks 2020, Rateliff offers this 90-minute live experience to the fans who were unable to attend his live shows last year.

In celebration of the upcoming record, Rateliff is debuting a live rendition of his track Mavis, which appears on his acclaimed 2020 solo album, And It’s Still Alright. Unintentionally, the song speaks to lack of in-person interaction that occurred last year; Rateliff opens the song by singing, “In other worlds, in other worlds I would be with you/And other nights, and other nights I think I’ve seen you.”

Says Nathaniel, “We started out 2020 very excited. The solo record was out and myself and the most of the guys in the Night Sweats were gonna hit the road to present the songs to the world. We were looking forward to performing the songs together with a string quartet and how it was going to make us a better band.

We had some of our favorite song writers and friends hitting the road with us. With a grand finale at Red Rocks with Kevin Morby and Damien Jurado.

Then the world came to stand still.

The songs on ‘And It’s Still Alright’ were about finding hope in times of struggles, and now it seemed the whole world was struggling. So a few months into the Pandemic we started to wonder if there was a way to bring the show we worked so hard on to everyone. If you can’t find a light you have to create one.

Somehow, we were able to play 6 nights at Red Rocks with the full 10-piece band and the production we had created for the show. Kevin Morby and Katie Crutchfield drove out from Missouri to join us.

Five of the nights had 175 people and one night we filmed to and empty amphitheater that normally holds 10,000 people.

It was beautiful to be there, even if it was 175 people. But the night we recorded this record it was heart breaking.

It was a realization that our world had changed and maybe forever. Needless to say it was a hard night to make it through. But we did it and now we are bringing it to you.”

On March 2, 2020 in Minneapolis, Rateliff kicked off his sold-out nine-month tour supporting And It’s Still Alright. Nine days later the extensive run of dates was cancelled due to the pandemic. The shows aimed to highlight various aspects of Rateliff’s stellar musicianship, showcasing stripped-back moments with just his voice and acoustic guitar to a full 10-piece folk band accompaniment including a string quartet.

Red Rocks 2020 features a wide range of music from Rateliff’s celebrated career, which includes songs that had never been performed live, several tracks from And It’s Still Alright and his previously released solo albums—In Memory of Loss, Falling Faster Than You Can Run and the Shroud EP—as well as Still Out There Running, a track from The Night Sweats’ beloved 2017 album, Tearing at the Seams. In addition, Rateliff’s close friend Kevin Morby, who was set to open the cancelled Red Rocks dates in August 2020, joins him for a duet on Leonard Cohen’s There Is A War.

Earlier this year, Rateliff made his debut as the musical guest on Saturday Night Live nearly one year after the release of his solo album And It’s Still Alright (Stax Records), which was released to widespread critical praise. The record peaked at #3 on iTunes’ Top Albums chart, debuted at #1 on Billboard’s Americana/Folk chart, landed at #2 on their Current Rock chart and resided at #1 on the Americana Albums Chart for eight consecutive weeks. The lead single and title track was #1 for eight consecutive weeks at Triple A Radio, #1 for nine consecutive weeks on the Americana Singles chart and #1 for three weeks at Non-Commercial radio, while NPR’s World Cafe ranked the track #1 on their list of Public Radio’s Most Popular Songs Of 2020. Additionally, the single Time Stands peaked at #1 on the Americana Singles chart and appeared within the Top 5 at Triple A Radio. Rateliff also performed on The Tonight Show Starring Jimmy Fallon, The Late Show With Stephen Colbert, Jimmy Kimmel Live! and CMT Crossroads while his Tiny Desk (Home) Concert premiered on NPR Music in mid- April.