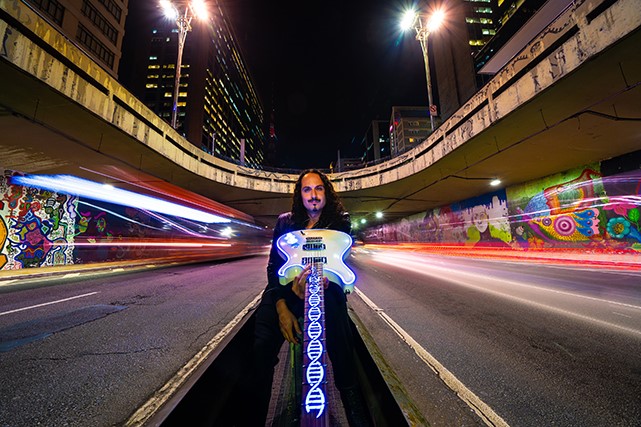 Sami Chohfi has lost his heart, and he’s asking her where she’s taking it on his new rock single, “Little One.”

The Extraordinary World singer/songwriter from Seattle mashes up rock and blues on his latest offering; an exciting sonic journey through love and love lost…

Expertly spinning the yarn on a familiar fable of falling for and failing to reckon when it falls apart, Chohfi’s exquisite lyrics, delivered in his signature rasp and undeniable singing prowess, bring a modern flair and uniqueness to the track’s unrequited love story.

“‘Little One’ was written while watching an episode of one of my favorite TV shows, AMC’s The Walking Dead,” Chohfi reveals. “I was watching a woman devour her lover and it got me thinking, ‘wow, this is a lot like a real relationship…’”

Marrying fact with fiction, Chohfi spins the tale on the ups and downs, craziness, and realities of relationships. The track features a variety of flair including ukulele, a 1960’s vintage piano solo, and a cameo by Kellii Scott (Failure) on percussion. “I wanted to write a catchy blues rock song with a unique vibe inspired by the one thing that inspires us to be at our most crazy, love,” Chohfi says.

Paired off with a visual component, the music video for “Little One” brings Chohfi’s story to life… Or, rather, ahem, to death.

Featuring an undead cast of characters for a Zombie-apocalypse-esque mini-drama, Chohfi’s unique double entendre is spelled out in his creativity to tell a tale. (‘Where are you going with my heart, Little One?’ he croons both figuratively, and in this video, literally.) Our protagonists make a quick stop at a gas station where the lead actress becomes infected. From there, her unassuming partner is seemingly ignorant of her venture into the land of the dead and, as she slowly descends into making him her next meal, the world around them is falling further into the hell flames of a full Zombie take-over.

“The intro features the voice of legendary radio personality, Marco Collins, over the car radio,” Chohfi explains. “We hired makeup artist Christina Kortum, who worked on the American TV show Grimm and is currently working on the new season of American Horror Story, to ensure the special FX makeup was top notch.

“The song and video tell the story of a romantic relationship that is not only infectious but consumingly toxic in all the right ways,” he continues. “Sometimes we find ourselves in love with the wrong person but, for some reason, we love the way it hurts and we keep coming back for more.”

“Little One” and “The Awakening” both serve as Sami Chohfi’s latest singles and, with the world slowly regaining its footing after a multi-year pandemic, the songwriter is venturing out on tour overseas this winter.