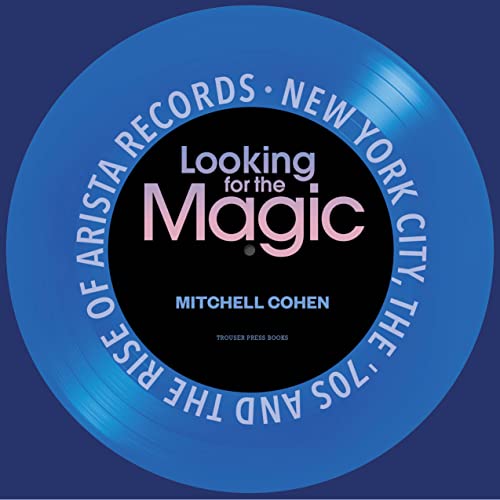 Looking for the Magic is a cultural-historical remix, a fresh perspective on how Arista Records reflected its place and time, New York in the 1970s and early 1980s. Through interviews with dozens of artists and executives, music journalist Mitchell Cohen goes inside the business of making and marketing music during this vibrant and diverse period. Under Clive Davis, rock, pop, punk, jazz, R&B, disco, cabaret and Broadway were all represented on Arista. The label sounded like the city it was at the geographical center of.

From its inception as a new entity built on the pop and soul foundation of Bell Records, to groundbreaking artists like Gil Scott-Heron and Patti Smith, to revitalized legends like the Kinks and Aretha Franklin, up to its launching of its biggest star, Whitney Houston, Arista Records’ story has never been told like this. Looking for the Magic covers the wide scope of the label’s roster: its giant pop successes (Barry Manilow), its dedication to cutting-edge jazz (Anthony Braxton) and its embrace of rock royalty (Lou Reed, the Grateful Dead).
Looking for the Magic (named after a song by Arista group the Dwight Twilley Band) takes the reader behind the scenes, to the Kinks’ backstage fights, Lou Reed’s on-stage diatribes, and to CBGB’s, Kenny’s Castaways and the Continental Baths. We find out how “Because the Night” made its way from Bruce Springsteen to Patti Smith; how Barry Manilow went from obscurity to stardom; how MTV ushered in a second British Invasion for bands like the Thompson Twins and Haircut One Hundred; and how Arista formed alliances with adventurous labels like Stiff and Ze Records.

Grammy-nominated scribe Mitchell Cohen has written about music and film for publications such as Creem, High Fidelity, Film Comment, the Village Voice, Musician and Phonograph Record. He began working at Arista Records in the late ‘70s, as a publicity and advertising copywriter, and then as one of the label’s A&R executives, until leaving the label in 1993. He has won a Clio Award and is the co-author of the books All These Things That I’ve Done (with Matt Pinfield) and The White Label Promo Preservation Society (with Sal Maida).