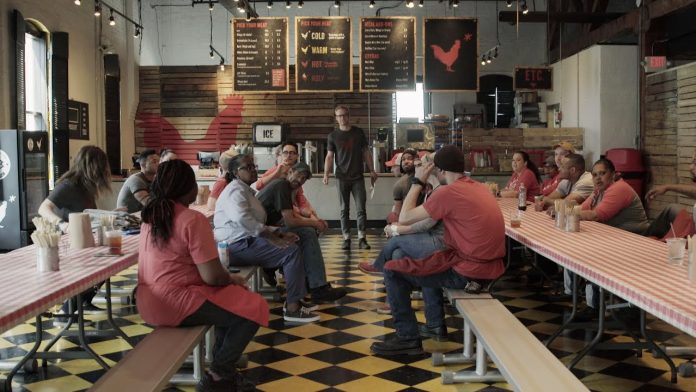 ANY COMMITMENT TO REDUCING our nation’s prison population should equally consider the fate of the formerly incarcerated — where will they live, learn, work upon release. According to the U.S. Department of Justice, more than 650,000 men and women are released from prison each year, and an estimated 60 to 75 percent of them remain unemployed for up to a year after their release, raising their risk of recidivism.

A small segment of the business community is beginning to look at how best to integrate formerly incarcerated individuals into the workforce. Business owner Joe DeLoss and his Hot Chicken Takeover restaurant are helping to lead the charge.

Hot Chicken Takeover is a Columbus, Ohio business that serves Nashville-style hot chicken and happily hires formerly incarcerated men and women to do everything from fry the chicken to run the back office. Committed to his employees as real assets, DeLoss goes beyond just job opportunities to offer his employees an array of benefits tailored to their needs — housing and transportation support, paid time off, and opportunities for professional development. It’s what he describes as “fair chance” employment.

For another take on post-incarceration employment, read “To Be Good Employees, the Formerly Incarcerated Must First Become Bosses” by Marlon Peterson.
The Marshall Project collaborated with award-winning filmmaker Katie Galloway for “Hot Chicken, Fair Chance,” a character-driven short documentary on DeLoss, his restaurant and the employees who are the backbone of Hot Chicken Takeover.