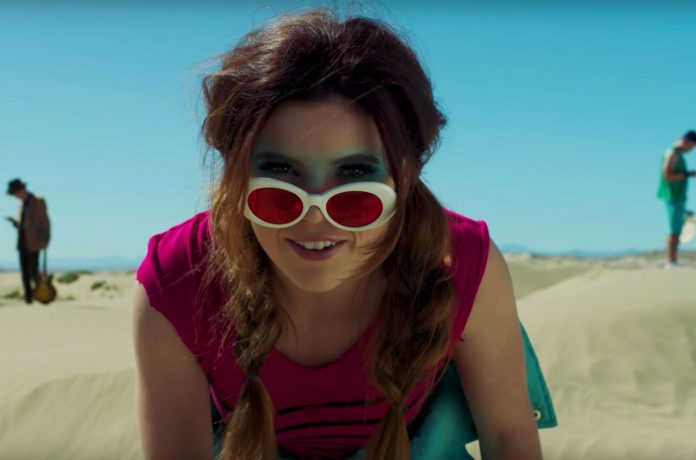 Today, multi-platinum trio Echosmith – Sydney Sierota [lead vocals], Noah Sierota [vocals, bass], and Graham Sierota [drums] – have announced their new studio album Lonely Generation, set for release on January 10th. They have also unveiled the music video for the title track and brand new single “Lonely Generation” directed by Danny Drysdale (The Killers, which happens to be Echosmith’s all-time favorite band.) The “Lonely Generation” video also serves as a sneak peek to the 11 additional music videos that the band has coming to support each song on the album. Inspired by the song’s message about how lonely and isolating it can feel in our hyper-connected digital world, serving as a reminder to focus on real-life connection with each other, the colorful and quirky video follows the band as they encounter people stuck in the digital world in various settings, from an aerobics class to the beach, and even to the Wild West. The bouncy alt-pop anthem, features a glistening neon beat, a sunny chant and acoustic guitar, and is the first taste of the band’s sophomore album.

“When Echosmith first reached out to me to see if I would consider directing a video for each song on their new album, fascinated, I asked to hear the music first,” says Danny Drysdale, the video’s director, “Needless to say I was really moved by the tracks and was flooded with so many ideas. The songwriting and the emotion and message of the album just drew me in. I hurried and called them to say I was hooked, ‘let’s do this thing!’ When we got into the weeds of shooting and the nitty gritty creative, it was a miracle to find that we see the world in many of the same colorful, cool, absurd, and beautiful ways. We shot all these videos in various parts of Utah with an incredible team, and I gotta say that working with this band has been one of my most favorite projects. I can’t wait for you to go see the finished videos very soon and then direct the next 12. Hint, hint.”

Beginning February 12th in Washington, DC, Echosmith will embark on their North American Lonely Generation Tour which will bring them to major cities from coast to coast before wrapping in Los Angeles on March 5th. Pre-sale tickets will be available October 16th at 10am local, with general on-sale beginning October 18th at 10am local.

Echosmith has also announced a very special Live from the Artists Den performance set for October 22nd at a secret venue in NYC at 7:30pm ET. The first 200 fans to purchase a ticket to Echosmith’s February 13th show in New York City at Le Poisson Rouge will automatically receive a free ticket to attend the band’s Live from the Artists Den show. Fans can also enter HERE for a chance to win a free ticket to the performance, which will air at a later date on American Public Television. The Artists Den is a critically acclaimed television and digital music series best known for presenting intimate, secret concerts by extraordinary artists in non-traditional, often historic settings. The show connects fans with a unique and intimate musical experience for some of the industry’s finest acts.

As Echosmith embarks on their next musical chapter, they continue to encourage hope, love and camaraderie amidst the growing pains and the happy moments that come with growing up. An uplifting and honest coming-of-age soundtrack, Lonely Generation incorporates vintage synthesizers and upright piano into a framework threaded together by inventive guitar work. “Everyone Cries” makes feeling sad okay, while “Shut Up and Kiss Me,” produced by Tim Pagnotta (Walk The Moon, Blink 182), is a danceable romp and “Diamonds” shines a light on the value of individuality. Meanwhile, “Follow You” holds a very deep significance for Sydney – she penned the acoustic love letter to her husband for their first dance at their 2019 wedding.

“We are a band, but we’re family first, which is a special and rare gift,” says Noah. “We get to learn and evolve together. The album is about trying to care for each other, grow, and experience joy and heartache in the internet age. It’s like a diary. We’re showing a piece of who we are that we’ve never shown before. We pushed ourselves to try new things and reflect our experiences in a fresh way,” shares Noah.

“We were just honest about happiness, love, and even being truly broken,” says Sydney. “We’re growing up in our own ways. We’re siblings and close friends, but we have our own lives too. There are a lot of different flavors to it. We got to be really vulnerable for the first time.”

Lonely Generation, produced by Jeffery David (Seal, Zedd, for King & Country), will be the band’s first release on their newly formed record label, Echosmith Music, created in 2018 with Warner/ADA.